Singing His Heart Out
A Visit with John Franz

Streetsinger John Franz has been a staple of Nashville life for well over a decade. But where does he go after Christmas? Unlike the birds he doesn’t migrate south. No, Franz heads west, to Bloomington, where he sets up shop outside the Jackson Creek Plaza-East Kroger.

“I’ve been playing there just as long as I have been in Nashville—13 years,” John tells me as we sit deep within WFHB Community Radio’s music archive in Bloomington. “It’s been a real lifesaver for me.

“When I first went to Nashville I didn’t realize that things just kind of drop off after Thanksgiving and Christmas. So one snowy night I drove over to Bloomington and stopped at the first supermarket as I came into town. I went up there and started playing and it wasn’t 20 seconds before the manager was out, (John imitates an unfriendly, growly voice) ‘You can’t do that here!’

“So I went over—I was scared to death—and I stayed away from the doors and the first thing, the manager comes out.”

John shows me how the man stood next to him, arms crossed, carefully taking his measure before unexpectedly offering, “‘I play a little guitar myself.’

“I like it in Nashville better,” he adds, “but I’ve made some friends over here, too.”

John has recently moved into a small cabin north of Nashville. “It was a change for me from living in trailers and campgrounds. There’s nobody around. Used to be I’d go home in the evening, there were people to visit with, hang out with. Sometimes it gets pretty lonely out there, just me and my dog Bobo. 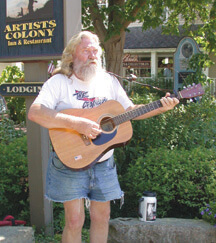 “When my dog was a puppy having him there with me doubled my money. It’s that image of the old man, with his good old dog, singing his songs. But my dog turned out to be a barker and a biter,” he adds ruefully. Now Bobo stays home.

Through the years John has played on many a Nashville corner before settling near the Artists Colony Inn. “There’s a whole lot more people traffic there, I do a little bit better on that corner. And it’s nice. It’s got a couple of stone benches. People ask me sometimes if that is the Liar’s Bench and I say, ‘No, it’s not.’” (The original Liars Bench was located on the courthouse lawn.)

Through the years he’s shared the streets with many other musicians. “They come and go. Most of the time they’re very courteous about not being directly across the street. There was a little guy that came and played for a long time, called himself Bojangles. He played a little mandolin and sat in front of Mountain Made Music, but he hasn’t been back in a long time. Gordon Bonham played on the streets for a little bit. He said, ‘I just wanted to see what it was like.’

“Most of the people, I see them coming in with banjos and guitars and walking up the street and about a half an hour later I see them going out. Most places won’t let you play. It’s not as easy as it looks to find a corner. You can’t just play on the sidewalk. You have to be on private property. And then you have to have permission.”

Visitors come to town expecting to see him, like the time “a guy from Texas comes up and says (plaintive voice), ‘I’ve been waiting 2 years to hear Mr. Bojangles. Remember I gave you two bucks three years ago when you sang that?’” John laughs.

“Brown County is full of characters. It seems to be the place to feel a little more free about things. Still, things are encroaching on us all the time,” he says with a twinkle in his eye. “I might just have to move to Helmsburg.”

I ask him if he’s considered playing in Brown County clubs but he shakes his head no. “It’s a big secret about how much fun and enjoyable it is to play on the street. I started out as a folkie, then, back in the 70’s, played the clubs ten or eleven years up in Indy. I like playing on the street. I like not having to show up at a specific time.

“It’s really gratifying playing on the street, y’know? I don’t want to sound egotistical but people really appreciate me—and they give me money. I admit it, I’m out there trying to make a living.”

Soon he’ll be thinking about returning to the streets of Nashville. “I’ve found over the years that when there are so many cars in the parking lot that means all the street parking has been taken and there is probably enough people. Coming up in March or April I’ll start checking on weekends.

“I’m pretty lucky. I get to sing some songs, make a little money, meet a lot of nice people, work a few hours every day. I know deep down in my heart that I really love it. I know because when I go out and play sometimes I start feeling good, whether there’s anybody around or not. Just singing.

“Being on the street has less to do with your talent or any of that. I think it’s the image of this old geezer standing out there singing his heart out.”