Joan (pronounced “Jo-ann”) Birdsong’s rambling home on Brown County’s Poplar Grove Road is filled to the brim with handmade stuff. Baskets, rugs, paintings and dried flowers adorn each room, and most of them were created by Mrs. Birdsong herself.

Best known for high quality baskets, produced with her son Bob, Mrs. Birdsong admits that their distinctive last name has helped to brand the woven creations. “We always kind of wanted to make baskets,” she recalled. “We’d talk about wouldn’t it be neat to make baskets ’cause baskets are kind of an old timey thing. Everybody always made baskets to carry stuff in.” The “egg basket,” consisting of a double-cradle design with a handle, is their signature basket. “That’s one of the harder kinds to make,” Mrs. Birdsong acknowledged.

The Birdsongs continue to sell baskets when they’re available. A small heart-shaped basket filled with dried flowers has proven to be popular at the Saturday Farmer’s Market in Bloomington. “We haven’t made any baskets in a while, but will again when the notion strikes us,” she said.

Regulars at the weekly Farmer’s Market, the Birdsong’s booth features handmade items in May and October, when crops or flowers are not yet ready. Lately, Joan Birdsong has been concentrating on hand-crocheted throw rugs, made from torn strips of cotton material. “Crocheting rugs is a ‘grandma thing,’” she said. “My mother didn’t do it but I learned to do it when I was just a kid. Now we have a lot in the neighborhood that I’ve taught to do it.” 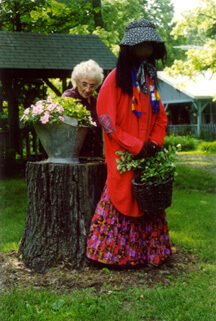 “Most people think I must use a giant crochet hook to work the strips of material, but I just use a regular size. The main thing is getting the strips ready. Sometimes we go to the fabric outlets and I buy big rolls, and sometimes we use old sheets. The width of the strips depends on the material. I’ve been so busy making rugs so I have a lot of friends that rip the strips. I give them a couple of sheets and they bring them back ripped,” she laughed.

The oval and round rugs are not only attractive. They’re practical. “The rugs don’t have to be sewn together like most braided rugs, since they are crocheted,” Mrs. Birdsong explained. “They are cotton so you can stick them in the wash.”

Although Joan Birdsong does not consider herself an artist, she has painted landscape and still life oil paintings all of her life. “I don’t really try to sell them,” she said. “I’ve given a lot away. A couple of mine have sold but I didn’t sell them myself. Von Williamson (deceased Brown County artist) was a good friend of mine. A long time ago I lived in town. And he said, ‘Boy Joan, I like that painting up there on the wall. What do you want for it?’ She chuckled, “And I said, ‘Well Von, what have you got?’ And he named a few things and a chain saw. And I said, ‘Von, I need a chain saw.’ So he brought me his old chain saw and he took my painting. And then when he died (boy I sure miss him), his family had an auction of his things and my picture sold for $1600! It was just a little snow scene.”

Joan Birdsong ended up in Brown County primarily due to her father, Carl Wilson’s, interest in the area. Mr. Wilson, a Methodist minister and professional writer who later owned Nashville’s The Ordinary restaurant and bar, had “always heard about Brown County as a good place to live.” He and his wife moved to Helmsburg Road after several of their six children were already grown up.

“I’m proud of my Dad,” Joan declared. “He wrote columns for the Indianapolis Star for about thirty years side by side with Hohenberger under the byline of “Tramp Starr.” He also wrote about farming stuff for a little magazine, Farm Life, and published three books of poetry. One book called Population 359 was about the little town we lived in when I was in high school (Milan, Indiana). He was also a good speaker and on the radio. He was really good. He just needed a press agent or something.”

Joan Wilson was born and raised in Dearborn County. After graduating from high school she went to school in Evanston, Illinois and got married. The couple started their family, and moved to Indianapolis where Joan’s husband worked. They later lived a short time in Brown County with their four sons. After Mr. Birdsong’s death, Joan eventually moved to her present house in Eastern Brown County, where crafts, flowers and herb gardening keep the 81-year-old busy and full of ideas.

“Everything I do is messy,” she laughed. You buy the cane all tied up neat and when you cut it, it gets all over. You don’t dare keep track of your time when you do baskets. You don’t make near minimum wage.” A sign in the workroom says, “Too hot to hoe, gone to the fair,” but she only uses it when county fair time rolls around. The rest of the time, she’s too busy to stop.

Birdsong baskets and rugs are available for sale in the Brown County Craft Gallery, located on Main Street east of the Courthouse.