story and photos by Jeff Tryon

Tucked away between the courthouse and the county office building in the northeast side of Nashville’s downtown district is a tiny village which displays and recalls Brown County’s past – The Pioneer Village.

Operated by the Brown County Historical Society, the Pioneer Village complex displays and recalls Brown County’s past in five preserved and restored buildings which allow the visitor to more clearly imagine life as it was lived in early Brown County.

The Kisers, in for the weekend from Dayton, Ohio, saw the Pioneer Village mentioned in a brochure.

“It was very interesting,” said Carolyn Kiser. “It gives you some feel for how the pioneers lived.”

The complex includes five buildings from yesteryear: A weaver’s workshop, a pioneer cabin, a doctor’s office, a blacksmith’s shop and the Old Log Jail.

“I enjoyed the weaving,” she said. “Listening to the history and watching her tell how they made the yarn from the spinning wheel and the fabric, I didn’t know anything about that.”

“I also liked going through the log house and seeing everything, how it might have been used,” said Lorna Kiser. “It was very nice.”

The Pioneer cabin was built by Galen Harvey in Jackson County between 1884 and 1886 and purchased as a set of logs by the Historical Society in 1976. The cabin accurately depicts a typical Brown County household of 1845.

The large log community building, once a barn, was moved from its original site in Jackson County and rebuilt on its present site as a WPA project in 1935 or 1936. A native stone chimney and fireplace was added at each end of the building. 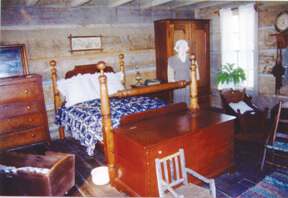 The Pioneer Village includes a working blacksmith’s shop, but the smithy lost its blacksmith recently with the passing of Ben Sparks, who had wielded the hammer and anvil there.

For David Kiser, many of the objects on display brought back memories. “A lot of those old tools and stuff were things our fathers had,” he said. “We didn’t really appreciate what they were.” He remembers his father taking him to the field and showing him how to mow with a scythe. “He showed us how to use all that old stuff.”

Perhaps the most interesting building in the collection is Dr. Ralphy’s office.

Born in Nashville in 1854, Dr. Alfred J. Ralphy practiced medicine in Brown County for nearly 50 years, dying in 1928. During his career, he delivered more than 2,000 babies. Dr. Ralphy built the small frame building next door to his New Bellsville home in 1898 to serve as his office. It was moved to its current location in 1976, the gift of Dr. Robert Siebel.

When not making housecalls by buggy in all kinds of weather, the good doctor was an amateur naturalist, taxidermist, collector and scientist.

Along with all the tools of his profession, Dr. Ralphy’s collection of mounted birds, insects, stones, etc. is on display.

Michelle Gick was especially interested in the weaving room with its two old looms, spinning wheels, yarn, flax and wool.

After carefully watching docent Nell Hamilton go through the process of carding wool, spinning yarn, explaining the dyeing process and, eventually demonstrating the operation of the small household loom, she got the chance to ask questions about pioneer cloth making. “She was very knowledgeable,” Ms. Gick said.

Ada Jones of the Brown County Historical Society said Ms. Hamilton’s skills demonstrating weaving and such help make the old ways come alive. “We do have a couple of others who are willing to learn, so maybe we can have someone over there most of the time,” Ms. Jones said. “This is something the public really likes to see done.” She said a group of about six women takes turns demonstrating the ancient craft, and more are being trained each year.

“There are many lovely displays,” Ms. Jones said. “After you get through the first couple of buildings, you are free to mosey around and enjoy the museum.”

A recent boost of funding from a Lilly Foundation grant allowed refurbishing of the log cabin, re-roofing of Dr. Ralphy’s office, and improvements inside the blacksmith’s shop.

Ms. Jones said the Society’s next project will be a makeover of the Veterans’ display. “Many of our World War II veterans are getting to an age where they know they need to pass their articles to us so that they can be preserved,” she said.

Ms. Gick and friend Bryan Juenger said the Nashville Express train tour driver brought the museum to their attention. The train also brings visitors to the village during the Christmas in Brown County festivities.

Nashville’s tiny window into Brown County’s rich pioneer heritage is open weekends and holidays from May 1 through the end of October. There is a requested donation of $1.50 with children under 10 free.