“Bluegrass Music’s Really Gone to Town” sang the Osborne Brothers in 1963, and the same can be said again forty years later. A lot has happened in bluegrass in the last few years, and the 37th Annual Bill Monroe Memorial Bean Blossom Bluegrass Festival promises to be one of the most vital and well attended in its history.

In 2000, the chart-topping success of the soundtrack from the film O Brother, Where Art Thou? gave bluegrass music its biggest boost since the folk boom of the 1960s. Back then, the Osbornes, Jimmy Martin, Jim & Jesse, and Flatt & Scruggs managed to place a few bluegrass singles high on the country charts, but bluegrass hits have been comparatively few in the intervening years. Now old-time music and bluegrass have staged a major comeback in the new millennium. Last summer Billboard, the influential music industry trade magazine, unveiled its Top Bluegrass Albums sales chart in recognition of the genre’s popularity, and around the same time bluegrass patriarch Ralph Stanley released his first major label album in decades.

Stanley will be performing at Bean Blossom this year, and his superlative showmanship and high, lonesome tenor is not to be missed. Ralph and his late brother Carter, as the Stanley Brothers, were among the first bluegrass stars in the late 1940s and 1950s, and their recordings from that era are now considered some of the finest bluegrass ever made. Carter passed away in 1966 and Ralph has carried on alone, becoming the standard bearer for bluegrass music since Bill Monroe’s death. If you missed Bill Monroe in his years at the Bean Blossom festival, don’t make the same mistake with Ralph Stanley!

Other performers scheduled to appear this year include the Osborne Brothers, Jesse McReynolds of Jim & Jesse, Doyle Lawson, J.D. Crowe, Bill Monroe’s son James, and a slew of veteran and contemporary performers, including some local and regional artists. Over forty acts will perform during the course of the eight-day festival, which draws fans from around the world.

In addition to the jam-packed performance schedule, audience participation is encouraged at Bean Blossom. Festivalgoers are invited to bring instruments and take part in the Bill Monroe Sunset Jam, which gives budding bluegrass musicians an opportunity to play alongside the pros. Concessions, vendor booths, a museum and a gift shop enhance the experience, and music will be in the air everywhere from the campgrounds to the stage. 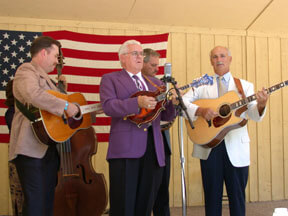 Bill Monroe founded the Bean Blossom Bluegrass Festival in 1967 and it has since grown into the longest-running annual bluegrass festival in the world. Monroe is credited with inventing the bluegrass style and is universally recognized as the Father of Bluegrass. The name of the festival was changed in tribute to him after his death in 1996.

Bluegrass music has evolved in its sixty-year history, but has retained its identity and audience by offering something very unique to listeners: An expression of rural American culture and artistry that is simultaneously nostalgic and relevant; one that emphasizes the importance of family, tradition, and just plain fun. The Bean Blossom festival is one of our greatest local treasures—an internationally recognized event that takes place in our own neck of the woods. 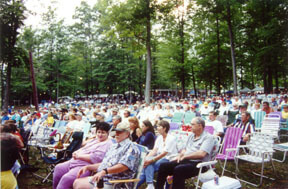 The weeklong festival will run from June 15th–22nd in the outdoor amphitheater at Bill Monroe’s Memorial Music Park and Campground outside Nashville, Indiana. Tickets and general information are available at