I ride with George Bredewater on a beautiful spring morning to the Kritzer Horse Farms in southern Brown County. Waiting for us is B.J. (Bill) Kritzer and David Crabtree, the farrier who works Bill’s horses.

Crabtree’s parents were born in Brown County but because his father was career Navy Dave didn’t call anywhere home. “Dad got transferred every three to four years,” he says with a shrug. He was thirteen when his father retired and the family moved back to Brown County. Upon graduating from high school Dave decided that he, too, would join the Navy.

Now, the Navy might seem like an unlikely place to start working with horses, but not the way Dave explains it.

“I’ve loved horses ever since I was a kid. They’re one of the greatest creatures that God gave to man. My last two years in the Navy we were shore-based all the time. A bunch of the guys went to a dude ranch in Virginia one weekend. Before you knew it I started to go there all the time. I bought my first horse and the guy that was boarding it just happened to be a farrier. We developed a strong friendship and after I got out I headed west to horseshoeing school in Oklahoma.”

That was 22 years ago and Dave has been working with horses ever since. “I had entertained thoughts about moving out west but my roots are here and I met my wife here, so I stayed.”

Dave is a member of the national American Farrier’s Association and achieved his certification about 5 years ago. “I’m working on certified journeyman now. It’s the highest level you can attain.” 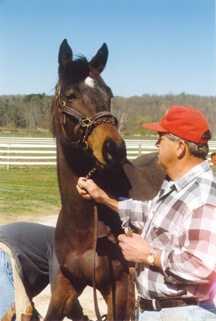 Sitting in on the conversation is B.J. Kritzer, retired science teacher and owner, with his wife Kim, of the nationally recognized Kritzer Horse Farms. He claps his old student on the back saying, “When you’re good word spreads. And he’s good. He’s worked on several broken down horses of ours and sure helped us out. Besides that,” Bill laughs, “he’s a neighbor.”

“This is the crunch time of the year,” Dave says. “The trail riders are starting so I’m setting a lot of shoes. There’s fox hunters, event horses, jump horses—they all require a little different type of shoeing. I put clips on a lot of my shoes and I like to ‘hot set’ the shoes I put on.”

“Hot set” refers to when shoes were hand made at a forge and applied “while still hot. You get a little searing heat on the bottom of the foot. That gives you an absolutely perfect fit plus you’ve sanitized whatever fungus or bacteria happens to be alive.”

With mass produced keg shoes, “You could just open or close them, nail them on, and rasp down a foot to fit that shoe. But that’s not right. Each horse is an individual You should always shape your shoe to fit the size and the dimension of the foot.

“A lot of it’s experience and, through our Farrier’s Association, I spend five to seven thousand dollars a year on continuing education—clinics, seminars, short-course schools.”

I ask him what kind of problems horses have when they’re not taken care of properly.

“This time of year the spring grasses are coming on quickly and founder is a big concern. We’ll see six to seven new cases before the spring’s over. Once the coffin bone starts rotating, then they’re going to be that way the rest of their life. Twenty years ago, if a horse foundered that was it. With technology and types of shoes and medicines it doesn’t have to be the end of the line. I’ve got about three or four right now that have foundered but are back on trail-use.

“We have modern acrylics, plastics and fibers. We can completely rebuild a hoof. Even fifteen years ago you didn’t have that ability. It’s called biomechanics—everything is measured out. We gauge the angles, we check toe lengths—it’s technical stuff. The horses are a lot better off today.”

I ask Dave how he approaches a skittish horse.

“I don’t go up to them right away. I go a couple feet from them and let them approach me. When they get comfortable I’ll pet and talk with them before I even bring the tools up. They are a pretty timid animal.

“After I work on one they know I’m not going to hurt them. Some, when they see me coming, will give a little nicker because they know I’m going to love on them. Others will stand there with their ears pinned back—just mad as mad can be.

“I’ve only had one that I’d like to forget and that was last year’s injury. That’s the first time I’ve ever been hurt badly and it was my own fault. I was working on a stallion and I’ve known this horse forever—I touched him the first time when he was an hour old—so I thought everything would be all right. I was just not paying attention. In fact, I wasn’t even looking at him. And he kicked with both hinds. He caught me right in the groin.”

Dave spent 14 hours in the Bloomington Emergency Room requiring vascular surgery. “It was my own carelessness. I thought I couldn’t be hurt.”

“I think,” George Bredewater observes, “that once a person has been around horses you never get away from them. It’s so much more than just nailing a shoe on.”

“Once it’s in your blood,” Dave agrees, “it never leaves.”

Dave owns six horses but “never get to ride and, much to my wife’s dismay, her horses don’t have any shoes on for the spring riding season.”

“The vet’s number one. They can help you because there’s yearly shots and inoculations that horses need. Your farrier’s number two. He will want to get them on a regular trimming schedule. The best thing that new horse owners can do is get involved in a saddle club, or 4-H club.”

And what should you look for in a farrier?

“I’m going to be put on the spot here because there’s some people that don’t believe in the National Association and/or certification, but I think that you should find a certified farrier. You know that he cares enough to get certified on his own, because it’s all volunteer. Checking with the local horse people will get a pretty good indicator of who to use and who not to. A competent farrier will be glad to give you references.”

Afterwards, we watch Dave and B.J. work on one of Kritzer’s horses, a mare that is scheduled to be bred the next week. It’s the first time her feet have been worked this spring and between the observers, the dog, and George snapping pictures, she is nervous. Patiently, Dave talks to her, clips and rasps her feet, and inspects an injury that she had suffered the previous year. Once he is satisfied she is gratefully led back to her stall.

I ask Dave what he most likes about living in Brown County.

“The people,” he states unequivocally. “I’ve been down here quite some time and the people are friendly, and will go out of their way to help you. I have traveled all over the United States and I’m always amazed, even after living here this long. It’s pretty, very pretty.”