T.C. and Selma Steele:
the Art of Landscape

When Theodore Clement Steele decided in 1907 to settle in Brown County, he sought inspirational subject matter for the landscape painting that was his first love. Steele was a member of the famed “Hoosier Group” of American Impressionist painters and, at age 60, one of Indiana’s leading artists. Other artists followed and soon Brown County was home to a bustling art colony that rivaled any the east or west coast offered.

Hundreds of artists in the years since have found the same inspiration in the rugged Brown County hills—and inspiration as well, in the home that Steele and his wife, Selma, created for themselves. After Steele’s death in 1926, his widow remained in their Brown County home. A few months before her own death in 1945, Mrs. Steele transferred the property—land, buildings, furnishings and artwork—to the people of the state of Indiana with the wish that it become a “sanctuary of the spirit” for all who love natural beauty and beauty created by man. Today, Steele’s “House of the Singing Winds” is part of the T.C. Steele State Historic Site and attracts thousands of art lovers each year. Visitors can enjoy Steele’s paintings displayed in his studio and home. Artists are encouraged to set up their easels to capture the property’s special beauties, either individually or at the two annual “paintouts” held in the spring and fall.

Artists and visitors who come to enjoy the Festival of Flowers PaintOut on May 17, 2003, will be able to enjoy the artistry of not one Steele, but two. While T.C. Steele occupied his time painting the landscape around him, Selma Neubacher Steele was creating landscapes of her own. She was the gardener of the family. She had studied art in New York, and as a trained artist Selma approached her gardens from an artist’s perspective. The Festival of Flowers PaintOut was created by request from the many artists who wanted to showcase Selma’s gardens, just as T.C. Steele did in many of his paintings. 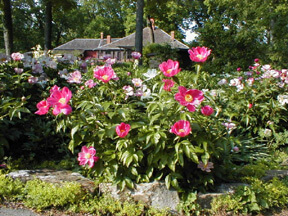 In May, visitors to the historic site are treated to a dazzling show of peonies, irises, foxgloves, and other “old-fashioned” favorites massed in garden beds and naturalized across the hillsides. Selma and her artist husband envisioned a “landscape plan that would not disregard the natural beauty, but rather enhance it.” Selma wrote, “The joy in my work reached it’s highest peak when I found I had made flower and garden arrangements interesting enough to be placed on the painter’s canvas.” Indeed, Steele’s best-known painting, Selma in the Garden, depicts his red-haired wife wearing a floppy straw hat as she crouches in her garden, hard at work, a tiny figure dwarfed by the surrounding masses of colorful blooms. When the painter was away, perhaps working on a portrait commission in the city, Selma’s letters kept him abreast of developments in her gardens. She once wrote of counting nearly 800 blossoms in the iris beds bordering the driveway.

Creating such an impressive show wasn’t easy. The soil was poor, there was little flat ground, and the property, an abandoned farm, was overgrown with brambles when the Steeles arrived. Selma had little real experience with gardening. In addition, the local men she hired to clear the land, build rock walls, dig the rock and clay and amend the soil with leaf mold from the nearby forest, found her “foreign” city ways baffling. Selma described the following conversation with one of her hired men: “The outdoor help had once again informed me that it was inconsistent with his idea of “man’s work” to be digging flower beds. This gave me a bright idea. I explained my reason for growing flowers was the same as his for growing corn and wheat. He sold his corn and wheat. My husband put my flowers into pictures and sold the pictures. This way we were both earning a living—only in a different way. He listened carefully and then said it explained much. I was to learn that this version came to be accepted ‘at the Belmont store.’”

Sadly, after Mrs. Steele’s death her gardens were neglected. The original garden design became obscured and even, in places, vanished entirely. Historic site staff and volunteers began an extensive garden restoration project in 1989, beginning with painstaking research. Fortunately, in addition to the paintings and historic photographs showing the gardens during the Steele’s lifetimes, Selma Steele kept extensive records about her gardening efforts. Long-neglected perennials began to thrive as smothering debris and choking weeds were removed. Surprisingly, many original plantings or their descendants had survived. Historic Site Maintenance Supervisor Steven Doty has been with the project from the beginning, and recalls the time a 1960s-era concrete sidewalk was removed from the south side of the house. The following spring, Turk’s Cap lilies struggled up from the compacted soil, able to reach sunlight for the first time in decades.

Today, visitors in the early spring can enjoy drifts of daffodils naturalized across the hillsides. Later in the spring, peonies and irises begin their annual show, just in time to be captured by artists participating in the Festival of Flowers PaintOut.

Garden restoration efforts have been assisted by individuals and organizations that have contributed the sweat of their brows as well as the money in their pockets. Of course, garden restoration is an on-going, never-ending work in progress. The fortunate combination of artist/painter and artist/gardener at the T.C. Steele State Historic Site has created a legacy of Brown County landscapes—and landscaping—for all to enjoy.

The T.C. Steele State Historic Site is part of the Indiana State Museum System, Indiana Department of Natural Resources. Contact the site at (812) 988-2785 or e-mail at <tcsteele@bloomington.in.us> for hours and information about the Festival of Flowers PaintOut and Selma’s gardens.