Our Brown County Dining
The Old and the New

In a small tourist town stuffed with dining opportunities, which eatery will best fill the bill?

Starting this October, we will feature some of Our Brown County restaurant advertisers. Space won’t permit a lengthy discussion of all the available restaurants, so this issue’s theme is “The Old and the New.”

In the space of just a couple of blocks you can eat in either Brown County’s newest restaurants or its oldest ones.

The flagship of Brown County restaurants, the Nashville House sits in the heart of Nashville, at the southeast corner of the intersection of Main and Van Buren streets. It’s presence and fare are so synonymous with the experience of visiting Brown County that many regular visitors don’t feel they have visited the County if they haven’t supped there.

The first restaurant in Brown County, the Nashville House was built in 1859 and originally included overnight accommodations. It served as an island of hospitality and home-cooked meals for artists, travelers and local residents.

The original Nashville House was destroyed by fire in 1943, and rebuilt without the guest rooms. Its food service and Old Country Store continue the tradition.

I decided to dine at the Nashville House on a weekday afternoon. I brought along a middle-aged couple, an older friend, and a grumpy two-year old child.

We were served the trademark fried biscuits and baked apple butter soon after we were seated. We sipped iced Sassafras Tea while studying our menus.

The dinner menu of the Nashville House features a variety of delicious entrees in a price range from about 15 to about 25 dollars. In the $20-plus range are the T-bone steak, barbecued ribs and the fried hamsteak with red gravy. The $15-range includes several good meals, including the hallmark country fried chicken, which comes with an appetizer of hyperbole, “premium chickens, brought to us fresh, prepared to your order and served in the golden-brown magnificence which can only be achieved with country frying.”

The chicken was good. And there were four pieces on the plate—a veritable mountain of fried chicken.

Also on the bill of fare, was the baked Hoosier ham. The menu states, “our famous Country Store hams processed in the old-fashioned sugar-cured way and given a superior flavor by double hickory smoking.” It was very tasty.

The roast turkey comes with a good bread dressing, and the roast beef is an “inside round of beef, slow roasted in the old-fashioned way.”

The polite and charming waitresses were efficient, gracious, and were up to the challenges of a late guest, a change in order after the order had been turned in, an added side dish after the meal had been served, and a cranky two-year-old. Nothing flustered them. They gave excellent, if not perfect service living up to the Nashville House’s reputation for Brown County hospitality.

All desserts are made in the Old Country Store bake shop ovens, including the pecan nut pie, and an exceptional coconut cream pie. It on the authority of my sister-in-law that the fresh fruit cobblers, a Nashville House specialty, are “ungodly awesome.”

While it isn’t the oldest, the Hobnob Corner Restaurant is located in the oldest commercial building in Brown County (1873)—the old Miller’s Drug Store on the southwest corner of Main and Van Buren, across from the Nashville House.

The Hobnob offers a delectable selection of entrees including soups, salads, sandwiches and specialties, and is especially loved for its lighter fare.

The Hobnob serves breakfast, lunch and dinner and is open every day.

I discovered Nashville’s newest restaurant, Marie’s Italian Deli, just a block east and across the street at Redbud Terrace on Main Street.

Opened in late July by local couple Frank and Kim Marie Jones, the lunch and dinner spot has some inside seating as well as take-out service of unique sandwiches, garden fresh salads and, their advertisements promise, “a daily special that is really special.” 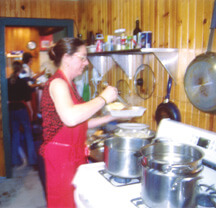 The special of the day when I dropped in recently was Fettuccine with sautéed artichoke hearts. Others include Tuscan bread salad, polenta, risotto, eggplant Parmesan, and three-meat lasagna.

They are experimenting with designating certain days for certain foods. Wednesday, for example, is always Calzone day at Marie’s.

The Marie’s Calzone is a masterwork which begins with a basic pizza dough, oiled with extra virgin olive older and stuffed with roasted chicken, copa, a peppered pork butt, mozzarella cheese and either Romano or fresh parmesan and baked to a fine, pretzel-like garlic-salted crust.

“It’s cheap!” he emphasizes with his hands. “It’s all under ten bucks, everything, even dinners!”

In addition to the really special daily special, Marie’s features four excellent, low-cost standard sandwiches, or you can create your own sandwich from their fabulous, not-of-the-Midwest deli case.

All of Marie’s meats are “packed spice” meats rather than injected meats, which gives them a better flavor and a more authentic consistency.

The chef has been using locally grown produce when available. “The menu is going to go the way of the best produce,” he said. “The menu will change with the seasons, according to what’s best at any particular time.”

The pasta is imported, and, again, Frank Chef assures, “We have the best pasta salad on the face of the earth.”

Marie’s offers catering and for deli trays, big salads or soups for everybody, can’t be beat for quality, price, or location.

Winterberry Cottage is the next to newest eatery in town (opened this spring) and is also run by a husband and wife team, Ron and Marisa Bernard. Located at 120 North Van Buren Street on the West side of the street, the Winterberry Cottage offers “specialties to scintillate your taste buds,” including gourmet coffees and other beverages, soups, salads, and a variety of sandwiches. Delectable pastries and desserts are available in addition to breakfast items.

Winterberry offers sandwich and dessert trays made to order and dine in or carry out options.

The lovely, shaded porch provides a bit of al fresco dining, and has become a favorite for visitors who like to sip an espresso and watch the world go by.

While I have your attention—a favorite home-cooked country meal restaurant and breakfast mecca, Mac’s Kozy Kitchen, currently at the intersection of State Roads 135 and 46, is in the process of moving to Salt Creek Plaza on State Road 46. So if you find some day that you’ve misplaced it, you might try looking there.