Yet none of these has celebrated the lore and legend of Brown County quite the way that Slats Klug has with his series of CDs—Liars’ Bench (with Steve Miller), My Brown County Home, and two Christmas albums.

With his most recent offering, Lies and Lovesongs, Klug continues mining the rich vein of Brown County tradition. There are more to come.

“I think there’s another Christmas one and a kids’ record,” Klug says. “That could happen. I had it suggested to me to do one about the Brown County Sheriff’s Log. Make it a real country album.” 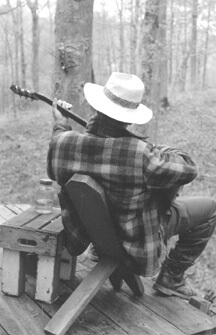 While my mind boggles at the thought of a Sheriff’s Log set to music, Slats talks about his most recent work. “I think this record is the most vibrant of my Brown County CDs. There’s more percussion, there’s more prominent electric guitar, and the songs are more groove oriented. There are still banjos and fiddles and twang, but in addition to that there are some soulful, southern grooves. I’m really curious to see how this record is received by Brown Countians. That’s the real test.”

Even though Slats has recorded over 60 songs about Brown County there’s still plenty to write about, such as the story of Chief Eaglefeather and his wife Princess Silver Heels shared with him by the late Fred Lorenz.

“They were pretend Native Americans,” Klug shrugs. “There’s a Hohenburger photo of him and he looks half Italian, half Irish. Very prominent, elegant nose. He was a moonshiner and a con artist. He had giraffes and elephants living out there in the back woods, and greased pole climbing, where the kids would climb up trying to get a silver dollar—that’s the hook line of the song. Anyway, Eaglefeather had two cabins back there. His mother-in-law lived in one and he and his wife lived in the other. This guy used to get annoyed with his mother-in-law and he’d sneak up behind her and chloroform her!”

For I Guess I’m Old Fashioned, about the poet Tramp Starr, Slats visited Starr’s daughter Joan Birdsong. “She brought down shoeboxes full of his stuff. I tried writing it in his style and used some lines from his poems in the lyric.” Gordon Lowry sings the lead on this song.

Lowry, like most of the musicians on Lies and Lovesongs, has played an important role in helping Klug create music that sounds like it has been distilled in the Indiana hills. Lauren Robert, Dave Gore, Bob Cheevers, Doug Harden, Kara Barnard, Dan Dolan, N. Scott Robinson, Kenny Strong, John Franz, and Beth Lodge-Rigal all help refine this sound. Robbie Bowden’s vocal on Gypsy Moon is especially evocative.

“I’d read Done and Been, which is Gypsy Moon’s book on hobos, and had written the song before I met her. At first I thought she was concerned that it was too much of a love story but she was into it.”

Slats has begun writing songs about contemporary Brown County residents. For instance the title cut, Lies and Lovesongs, was inspired by the life of David Yaseen; the upbeat Possom Trot by Von Williamson; and Simple Song by streetsinger John Franz.

Other songs use Brown County themes as a starting point. Such is Hillbilly Hoodoo, Klug’s take on the mysterious first white settler of Brown County, Johann Schoonover.

“Schoonover is described as a semi-barbarian. Maybe a man, maybe a woman, maybe an herbalist. Maybe he was the Loch Ness monster. I just figured I could write whatever I wanted to.”

When a picture taken in the 1890’s of young Margaret May Shipley Nelson caught his eye it inspired the love song Come the Spring. “She looks so modern,” he says. “I found that old picture in Brown County History and Families. I read her story and put that song together. That’s a pretty romantic look.”

Perhaps the best realized and most humorous song on the CD concerns the inestimable Onya LaTour, who planted the seed of Modernism in Brown County’s rocky soil. “I’m wondering if I’m going to take heat for Lauren’s Transylvanian accent,” he worries. Robert’s vocals, usually powerful and emotional, take on a jaded, otherworldly air as Onya contemplates her Brown County neighbors’ laconic query—“But is it art?”

Slats has planned a live performance of the new songs on Saturday, September 6th at the Brown County High School Auditorium to benefit Big Brothers Big Sisters of Brown County. Klug expects most of the musicians from the CD to turn up. “I hope for a quorum,” he laughs. “We’ll probably do seven or eight of the new songs and then mix it up with the old stuff.”

Tickets are $15 in advance, $17 at the door, under 12 $8. They are available at the Brown County Visitors Center, Big Brothers-Big Sisters of Brown and Monroe counties and at the Lexington House. Doors open at 7:15 p.m.. Lou Stant opens the show at 8. CDs of Lies and Lovesongs will be available at the show.

There will also be the annual Slats and Friends’ Christmas show the first Saturday after Thanksgiving at the Brown County Inn.

You can find Lies and Lovesongs at stores in Nashville, and in Bloomington at TD’s CDs and LPs and Bloomingfoods. Slats and Friends will also be featured on the popular Across Indiana program in late November.

Klug continues making music for the best of reasons. “I really like it. I like the shows. I like the research and the stories I find . . . I like writing this stuff more than writing about my own angst,” he adds wryly.

“It’s interesting,” observes Marvis Foley, who has been sitting in on our conversation. “You’re part of a tradition, too. You’re an artist who comes from the outside and is part of it, yet has a detachment, just as many of the Brown County artists came from the outside. So it’s kind of cool that you’re now part of that tradition. You’re extending it.”

“I think it would be harder to do if I was a Brown County guy,” Klug replies. “I like being near, but not from, Brown County. By having a certain stranger’s point of view I get the best of both worlds.”