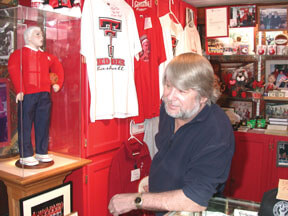 To every meal there is a reason. Sometimes one may crave an elegant meal and indulge in a wide-ranging variety of delicacies and specialties.

But sometimes, a guy just wants a sandwich.

Nothing too fancy, but also nothing too—how shall one say—pedestrian?

And the perfect destination for seasons of the stomach such as these must be That Sandwich Place, a straightforward, no frills, not-afraid-of-what-it-is eatery tucked away under the historic Nashville House right smack in the middle of downtown Nashville.

Slipping down the basement stairs at number 38 Van Buren Street, one enters another world, a world not just of tasty, reasonably priced luncheon platters, but a world of college basketball.

You see, The Sandwich Place is about more than just sandwiches. It is a sort of a shrine and homage to an era not so recently bygone.

Back in 1971, a bright-eyed young basketball coach came to Bloomington, Indiana, where he embarked on a road that brought him fame, fortune, controversy, and achievement, a road that over the course of many years, for better or for worse, turned him into Bob Knight.

A year later, in 1972, Larry Hawkins opened “That Sandwich Place” underneath Brown County’s most famous restaurant with a simple plan: a limited menu, mostly of sandwiches with a minimum of pretension and fussiness.

The repository of his vast and detailed collection is That Sandwich Place and, 30 years later and much water under the proverbial bridge, every nook and cranny, every available inch of wall space in the small subterranean deli is covered with the memories of Coach Knight’s legendary career at Indiana University, as well as many other offbeat tidbits (a photo of Coach Knight as an Ohio State Buckeye; a large team photo of Larry Bird’s ISU team; and maybe a dozen signed basketballs commemorating various milestones.)

As you come down those steps to the front door, you encounter a life-size cutout of Abe Martin holding a sign which touts it as a Place “…where the Bob Knight legacy lives forever.”

Of course coach Knight has moved on from the Hoosier hills to the independent nation of Texas, but that does not deter Mr. Hawkins or diminish the fervor of his admiration for the man TV blabalator Dick Vitale dubbed “The General.” In fact, Texas Tech T-shirts and official folderol are proudly displayed along with other IU and Knight collectibles in the “The General’s Corner,” the mini-shop surrounding the check-out counter.

The restaurant is surprisingly roomy, the service is quick and friendly. If you’re lucky you get Jenny, who has worked at That Sandwich Place for 30 years!

And the menu is simplicity itself — “nine-and-a-half” platters. One is a chef’s “Hi-Calorie Salad” and the “half” is a “Crumb-pickers Special,” a peanut butter and jelly sandwich on white bread made “just like mom does.”

And that is the best part about That Sandwich Place; a sort of small-town homey ambience that just doesn’t take itself too seriously.

I have to love a Brown County restaurant that has for decades shamelessly purveyed the “Whoppin’ Big Dawg Platter”—hot dogs on a Kaiser roll with cheese, ketchup and onion—and the “Upper Income Baloney Sandwich Platter,” which is…well, a baloney sandwich with Swiss cheese and lettuce, mustard and mayonnaise AND deviled eggs. Yes, deviled eggs.

I had the “Whale Sandwich Platter” and it was delicious; a lightly breaded cod fillet on white bread with lettuce, tomato and tartar sauce and French fries. My luncheon companion selected the “Hungry Man’s Hamburger Platter” a nice big lean grilled burger with the usual toppings. She offered and, purely out of professional interest, of course, I gobbled down several bites just to confirm that it was delightful.

The menu is simplicity itself and nothing on it is over $6.75.

And just to top it off, a little something for the sweet tooth, three kinds of pie: Dutch apple, peach, and pumpkin.

And as one munches contentedly on a sandwich and French fries, the Ghost of lU Basketball Past floods the senses and companions inevitably begin to reminisce about where they were, what they were doing when the perfect team finished the perfect season; when Isaiah led us to the promised land; when Keith Smart dropped “The Shot.”

But most of all, like it or not, about Bobby; the plaid jacket days, the stomach out of the sweater; shouting, laughing, head-in hands. Bobby, holding somebody’s baby; Bobby hurling the infamous chair; Bobby and a raw, wide-eyed recruit…

The torrent of memories floods across the eye and spurts from the psyche unbidden, in a kind of bitter joy.