Hidden on the backstreets of Nashville (Gould Street and Old School Way) is one of the jewels of Brown County. Off of the main tourist drag lay this treasure of pioneer life encompassing the period of those living in Southern Indiana from 1850–1920. The exhibit offers something for both the young and older visitor. It is well-staffed by volunteer docents of the Historical Society. Period music is frequently playing to add to the ambiance. Visitors can plan a leisurely and informative one-hour visit or expedite their experience to suit their schedules.

The tour of the complex begins with an overall introduction by the greeter in front of the Museum Building. James Voland discovered this unique structure in Jackson County when he was rabbit hunting in the 1930s. The Works Progress Administration (WPA) reassembled the building on the present site in 1935 and 1936.

The building’s unusually long 60-foot logs were moved with great effort. Hedy, Oral, and James Voland managed the crew who removed the building and reassembled it in Nashville. Two chimneys were added on each end. The building houses a loom room and a historical crafts and gift store with many fine local exhibits in the large upstairs room.

Visitors entering the building witness demonstrations of a loom and a fabric making display. After seeing the cloth-making equipment in action you can appreciate the time and effort required to produce the early pioneer textile goods.

The guests then pass on to a pioneer cabin. This 1850s cabin was moved to the present site without the benefit of power tools. The logs were lifted into place with a hoist while using a broad ax and adz to correct log configurations. The shingles were heartwood of chestnut-oak logs made by froe and mallet. Finishing touches were added with a Brown County stone fireplace and chimney.

The interior of the cabin has some unique items. A built-in oven is within the fireplace structure. This was added when the chimney was built and represents a state of the art accessory for such early times. The loft has a removable ladder that served as a good control for the isolation of children from weary parents. The cabin is furnished with handcrafted cherry and oak furniture. An exhibit of the many tools and accessories of a pioneer cabin and even a corner cupboard of fine china is in the cabin. The nearby Ohio River served as a smooth highway to ship fragile items to within feasible recovery range of Brown County. 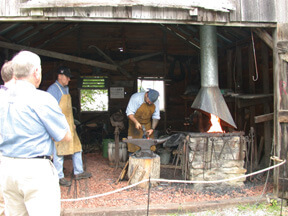 The tour continues with a stop at the village blacksmith shop area with more live demonstrations. A recent Brown County Community Foundation grant supports live music performances and actual blacksmithing activity with demonstrations on a forge, anvil, and all the tools needed to service the operation. A resident blacksmith lectures while demonstrating the making of useful items for sale or display. He is also available for custom orders.

The continuing circuit leads to Dr. Ralphy’s office. This building is a must for the most discerning historian. The doctor’s period from the late 1800s–1920s is preserved in this exhibit. The horse and buggy doctor died in 1928. His daughter Gladys Ralphy Whitaker sealed off the office and approximately fifty years later, the Historical Society received all his equipment and the building intact, compliments of the late Dr. Robert Seibel.

The building contained his herbal medicines with mortar and pedestal, medical, surgical, and dentistry equipment, plus his own taxidermy items including a Golden Eagle. His entire library of medical books is in the office including volumes for treatment of wounds in the Civil War. Dr. Ralphy delivered over 2000 babies at $5 each and was frequently paid in farm produce. His ledgers are open for viewing in the office.

The log jail is last, but not least, on our tour. This is the only building of the complex that was always on its original site and stood alone in 1879 at current place in an open field. Its unique walls are in three parts with the inner and outer parallel and the center logs perpendicular and floating. The reasoning to the construction of the almost four foot walls was that attempts to saw out would lead to frustration as the center logs would keep dropping. Three iron doors secured the bottom opening and a ten-inch key secured the inner door. Three iron grates were used for windows with iron covers to completely darken the facility. Women were later incarcerated upstairs and men downstairs until the jail was closed in 1919.

The Pioneer Village Musem is open Saturdays, Sundays, and Holidays from 1:00 to 5:00. There is a requested donation of $1.50 with children under 10 free.