Nashville is having Barnyard Friends
over for the Holidays 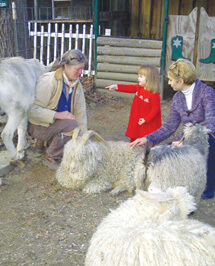 When Rena Stephens Kirk moved thirteen years ago to the remains of her great-great grandfather William Belvy Stephens’s homestead just west of Nashville she had no idea that she would become an exotic animal farmer with over seventy-five birds and beasts. Now ending its fourth season, Barn Yard Friends is more popular every year 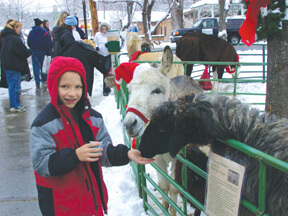 The interesting animals may be seen at the Village Green across from the Gazebo in Nashville during the first two weekends in December (sponsored by Brown County Hotels and Restaurants) as well as at their home, the Upright Ranch and Gallery on Highway 46 west of Nashville.

“I brought my horse down, which I was boarding up north. I had to get a mule to provide company for the horse,” said Rena. “Then I got a couple of chickens and a couple of sheep. So this is basically a thirteen year collection of animals.”

People interested in the unusual animals were coming by. More and more wanted to see them. Rena eventually permitted some church groups to visit and it kind of grew from there.

“Then folks had to walk up the hill to the main barn to see the animals. It was hard on elderly people, young kids and those with strollers. So when we tore down the old farm house we put up this tobacco barn,” explained Rena. “ We made it into the historical museum with a fiber display complete with a spinning wheel and other old farm items for people to enjoy.”

Displaying everything from little bitsy eggs to ostrich sized eggs the gallery contains, among other things, old saddles, sidesaddles, an old time bicycle purchased at an auction, frontier dresses and some civil war items.

“I think I am an historian at heart. I am into re-enacting. It is just kind of part of me,” said Rena. “Everybody says when you walk in here it looks just like my house looks,” she laughs.

Walking onto the old worn wooden floor, salvaged from the Indianapolis Trailways bus station, guests are greeted by a large friendly Irish Wolfhound dog named Cowboy. A comfortable homey old general store atmosphere puts folks in the mood to sit down and play a game of checkers. The three month old Lion Head Bunny, a new breed out of Great Britain brought to America recently, sits on a table across the room seemingly unconcerned about Cowboy.

“The spinning wheel corresponds with the animals here because we sheer all the animals in the spring and I offer the fleeces for sale,” said Rena. “I send some to a mill and have them processed for spinners. I spin myself and demonstrate on the spinning wheel if someone asks.”

Fibers sold to local spinners include camel, lama, mohair and different breeds of sheep. Most are hard to find elsewhere.

“We our proud of our Karkul and Navajo-Churro wool from Mexico and New Mexico which the Navajo Indians use for rug weaving,” said Rena. “We have old English Miniature Southdown Baby Doll sheep derived from the original Southdowns before Americans started breeding them for big meat sheep. Jacob is our four horn sheep. I am pretty proud of him.”

According to Rena the Jacob sheep were an ancient breed first recorded in the bible. They are spotted with two, four and even six horns.

“I have a Lincoln sheep and Black Welsh mountain sheep. They were my very first sheep and now I have black and white ones,” said Rena as her eyes lit up. “We also have two cashmere goats, for making cashmere sweaters, and we have angora goats which provide mohair… one lama, one alpaca and one Dromedary (one hump) camel.”

Rena’s personal time for fiber arts is limited as many hours are consumed by taking care of the forty-seven head of alternative livestock and an additional thirty different types of birds. There are a dozen peacocks, two Giant Toulouse geese, a guinea, a red golden pheasant, a bronze turkey, two silky chickens and a macaw.

Bird’s feathers are for sale in the Gallery as are kitty toy balls made from sheep fibers. Other items for sale include fiber angel ornaments, felted items and animal cookie cutters.

“We are open by appointment for groups or whomever is interested at any time of the year,” Rena commented. “We shut down regular hours for the winter months and we open with our regular hours again in April depending on weather.”

Rena reports a variety of the animals will be present for the four December days in Nashville.