“Winter Wonderland”
at the Nashville Follies

Winter Wonderland, the Nashville Follies’ delightful Christmas production, is a show for the entire family. And it seems that many families have made coming to the Follies a holiday tradition. Reservations have come in with a note, “This will be our 11th Christmas show with you.” And in their 11th season, the Nashville Follies’ cast rivals any on stage anywhere. The merriment, the comedy, the singing, and the dancing are gifts to all.

The opening number sets the mood as we all “Need a Little Christmas.” And the pace continues as the cast reverts to memories of childhood and become “kids” at Christmas. The fun never lets up as you meet Suzy Snowflake, elves, Rudolph the Red-nosed Reindeer, Leroy the Red-necked Reindeer, and of course, Santa Claus.

There are more new numbers this year and more surprises than ever before. But for those who love the tradition of what they have seen in the past, be assured your favorite numbers are still included.

The Nashville Follies is truly a family affair. Most of the cast has been with the follies for years and includes: Jasup Smith, Doug Leeper, Whitney Thetford, Kelley Rounds, Kimberly Kisner Graham, and Melissa Bodnar. Also joining the cast briefly this year are Delaney and Aaron Graham, children of Kimberly and grandchildren of Joan Kisner, the theatre’s writer and producer. Off-stage Brandon Graham, a sibling of Delaney and Aaron’s, works at various jobs including chief popcorn seller. At the soundboard is Kimberly’s husband, Mike Graham. Joan’s son Steve, is the theater’s longtime general manager.

Attend the Follies’ Winter Wonderland this holiday season for a mystical, magical experience. Shows are Fridays at 8:00 p.m., Saturdays at 5:00 p.m. and 8:30 p.m. through December 18th with one additional weeknight show on December 1st at 7:00 p.m.

Now is a great time to make this show a family tradition, if it isn’t already one. 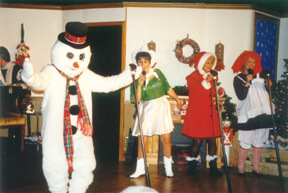 Old Fashioned Christmas, November 26th through December 18th, is the final production at the Pine Box Music Theatre in 2004. It has been a rewarding year. Attendance is up, season ticket sales continued to rise and tour operators ranked the Pine Box as having the best shows they booked in 2004, Owners Bob and Romilda Hamontre thank all theater patrons for their support.

Eight productions are scheduled for 2005. The season will open in April and run through December.

Season tickets go on sale in January. Those Good lime Gals & Guys will again headline all the Pine Box Music Cabaret shows in 2005. This outstanding, all live music troupe, has been together for 16 years. The music runs all the way from the 1920s through 2000. The shows are all written, directed, music arranged and choreographed by members of the troupe.

Our Brown County magazine will have the complete schedule, ticket prices and other information in their March 2005 issue. You will also be able to find all the information on the Pine Box web site at <www.pineboxtheatre.com> or check their link with the Brown County Chamber of Commerce under entertainment. Information will also be available at (800) 685-9624.