Early Brown County artist I.W. Merideth (1878–1954) is still remembered by some of the older county residents, although his legacy of oil paintings is scattered throughout Indiana and Illinois. Several fine landscapes hang at Grasshopper Flats, the Nashville jewelry business of one of Merideth’s grandsons, Doug Stoffer. And the Brown County Art Gallery houses at least three Merideth paintings in their permanent collection.

The Harmony Baptist Church in New Bellsville also owns a painting of their church, donated by Mrs. Grace Gredy and Mrs. Ollie Kritser several years ago. Known as Watt Merideth by his friends and neighbors, “(he) loved the Brown County hills and saw in painting the church at New Bellsville an emblem of the sacredness of the surrounding countryside and the little country churches nestled there…” wrote a prominent church member at the time of the donation.

Isaac Watt Merideth was one of nine children born in Frankfort, Indiana.

In those days, they took a train to the edge of the county and went the rest of the way into Nashville (about 10 miles) by buckboard. “Ma” Ferguson’s establishment was a favorite stop-off. Another regular at that time was artist, Carl Graf, who camped out in a tent along the creeks. Anecdotal evidence suggests that Graf instructed Merideth.

Although he pursued art as a hobby, Merideth’s main interest was making a living after marrying the former Edith Beazell in Indianapolis, and worked in an architect’s firm as well as ad agencies. With a son and two daughters (Roger, Jane and Rosemary), the Merideth’s moved to the Beverly area of Chicago in 1928. Watt Merideth managed a printing company and produced commercial artwork on a regular basis. Through the Beverly Sketch Club and the Ridge Art Association, he became well known in the area for his Brown County landscapes, but also did portraits and still life paintings.

Photojournalist Frank Hohenberger (1876-1963) wrote in The Indianapolis Star in the early 1950s that I.W. Merideth was partially responsible for introducing Brown County landscapes to the Chicago public. “The Chicago Tribune was giving a lot of publicity to Brown County and that helped sell quite a few of his (Merideth’s) efforts….Even in the Depression he was quite successful.” Merideth eventually became an instructor for the Beverly Sketch Club, and also taught classes in Blue Island, Ottowa, and in other locations. His first solo exhibition took place at the Chicago World’s Fair in 1933.

While living in Chicago, the Merideths shared a cabin on State Road 135 South with another couple, and came to Brown County on weekends to paint and enjoy rural living. Merideth exhibited in numerous galleries, and his work is in several public collections, including the Board of Education and the Field House in Chicago, the Union Chapel in St. Paul, Minnesota, and sorority chapters at Indiana University. Twelve of his paintings were accepted in the annual juried Hoosier Salon exhibitions from 1936 through 1943.

Instrumental in getting a new building constructed for the Brown County Art Gallery, Merideth retired to the area in 1950. He built his own cabin on State Road 135 South, just north of Van Buren School. Doug Stoffer’s mother, who was a daughter of the Merideths, said that her father was one of the top selling artists in the local gallery. 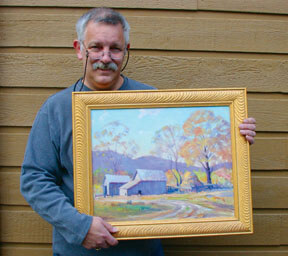 Stoffer, who moved to Brown County from Chicago when he was nine years old, remembers visiting his grandfather’s studio years earlier and seeing the length of the room stacked with paintings in the natural light of the dormer windows. “He did a lot of his own gold leafing on the frames,” he said.

Only four years after retiring, I. W. Merideth died and was buried in Greenlawn cemetery, adjacent to the Brown County Art Gallery. Edith Merideth, who had shared her husband’s interest in art, studied watercolor painting with Fred Oswald at the Chicago Art Institute after her children had grown. She outlived her husband by six years, and was buried next to him. According to Doug, “They wanted to be buried where they could see the Gallery.”

Merideth’s paintings are treasured by family members and those who purchased them during his lifetime. When they do occasionally come up for sale, good landscapes have been commanding significant prices. Although he painted during the heyday of the early Brown County art colony, I. W. Merideth was not a full-time resident until after the early colony faded, and did not enjoy the name-recognition that others achieved. Eventually, his quality work will no doubt attract the attention it deserves.