On a warm Brown County afternoon, Barbara Livesey sat in her cool basement on a squeaky office chair and reflected on the circuitous path that led her from Indiana to New York and back again.

Surrounded by books, fabric, clothing and sewing machines, Livesey told of a childhood where rainy days held the promise of exploration.

As a child growing up in Indianapolis, Sundays were spent at her grandmother’s house in nearby Wanamaker. An attic and a barn there guaranteed there were no bad rainy days.

“I would go directly upstairs and put my hand on any drawer and pull out some broken bit of another century,” Livesey said.

Barbara’s mother kept a “rainy day trunk” in the basement with hats, shoes, pantaloons and candelabras, all great for playing dress-up. There were paisley shawl scraps, oriental rugs, and pieces of knitted lace. These scraps had people and stories attached to them, she said, which instilled a sense of history and curiosity in a child and was a recipe for a life-long trip.

After graduating from Miami of Ohio with a degree in graphics in 1959, Barbara made good on a promise.

“When I was 15, we visited New York in the summer and I told my parents I would go to New York City when I got out of college,” she said. It became a self-fulfilling prophecy.

She lived with college friends in Greenwich Village and did production work for Reader’s Digest for a year before getting married. She then took a job as department secretary in the fashion division at Pratt Institute before her two children were born.

Around 1975, Livesey joined a friend in a clothing and gift business called Auntie Macassar where they personalized production-made garments and other items so they looked handmade. This involved adding beads to sweaters or jackets, or leather trim to skirts. They were selling to major department stores and boutiques across the county when Livesey decided to leave the business in 1980.

About the same time, she got a call asking her to teach a survey of the fashion industry class at Pratt Institute in Manhattan. Eventually she also taught History of Costume and other classes at Pratt.

“Fashion is what we wear now, and costume is what people have worn in another era which was fashionable then,” she explains.

During the spring semester, her costume classes met at the storage area of the Metropolitan Museum of Art, where students got to examine and draw pieces from the museum collections. Livesey says she learned quickly to assign term papers that interested her. One of her favorites was to have students “undress a painting” from the museum’s collection by researching what people in other time periods would have worn.

In the 1980s, she became proficient working with leather and fur and designed fur accessories for Henri Bendel, an upscale New York store.

During her years in New York, she acquired a small collection of textile fragments. After being in the city for awhile, she couldn’t believe what people threw or gave away. For outings, she took her two children in the stroller and looked through thrift shops and Salvation Army stores. Then she would research the items she found. She says there were small auctions where purchase of an “odd lot” would keep her busy studying for a week or two. Although she didn’t set out to have a textile collection, if someone was getting rid of an interesting piece and she could afford it, she bought it to preserve it.

She mentors students from Brown County schools and says she tries to teach students to think and “do something well.” She also willingly shares her knowledge with others, “as long as I can talk about what I want!” she jokes. She presented a talk at a meeting of the Brown County Fiber Arts Group earlier this year and those who attended were entertained by her stories and the opportunity to view some pieces of fiber art from her collection. 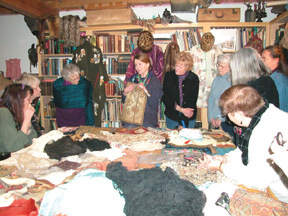 “She’s a treasure,” said one group member. “She has this vast storehouse of knowledge tucked away in her head. It’s a treat to hear her discuss how a piece was created.”

She also can advise people on the history or quality of a piece they own but “don’t ask me to put a value on it,” she cautions.

Livesey retired from teaching in 1998 and bought property near her brother’s home. She says it’s a lovely idea to live in the woods of Brown County amid her library and bits and shards from a lot of places.

She’s always done some type of handwork and she loves working with fiber. She says she knows there will be a new adventure in fiber tomorrow, perhaps something she finds at a thrift shop, which sends her off on another week of study. To Livesey, the greatest treasure is learning.

“I’m always curious about what people are throwing away,” she added.