Genevieve Goth Graf
The Woman in the Background

Genevieve attended the city’s Normal College and, in 1915, began a career in education that would span more than four decades. She saved part of her teacher’s salary each week to help with Marie’s expenses at the Art Students League in New York City. Furthermore, Genevieve wrote to Marie every day during her sister’s ten years of fine arts study.

Genevieve was also responsible for Marie’s relocation to Brown County, having purchased the property on 135 North where Marie and V.J. Cariani (1891–1969) (more commonly known as “Cari”) eventually moved.

Carl Graf (1892–1947), a Bedford, Indiana native who had attended the Arts Student League with Marie and Cari, started coming to paint in Brown County in the early 1920s. Nicknamed “Shorty,” the six-foot-four artist was a memorable sight, setting up his easel near creeks and country lanes. He often painted with his old classmates. Marie, Cari, Genevieve and Carl regularly tramped through the woods, struggling with easels and palettes, to find inspirational subjects. Carl encouraged Genevieve to resume her painting and began giving her art lessons. 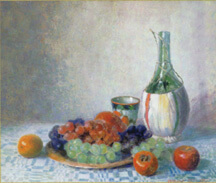 “Fruit and Bottle” for sale at Brown County Art Guild.

After several years of camping out during his summer painting trips, Carl Graf finally built a permanent home east of Nashville in 1925. Three years later he reportedly, due to shyness, asked a friend to go to the courthouse to take out a marriage license on his behalf. He then took Genevieve as his bride and the couple made Graf’s “Lone Tree Ridge” cabin their summer home. Winters were spent in Indianapolis at Genevieve’s family home. Graf continued to work from his two-room studio in the Union Trust Building downtown while Genevieve taught classes at Indianapolis Public School #7.

The time spent teaching, however, became an obstacle for her newfound passion—painting still lifes. Genevieve worked to improve her painting skills between her days at school and her domestic responsibilities.

Genevieve’s household duties as a wife were nothing new. Due to her mother’s poor health, she had been the housekeeper and cook in the Goth residence while also working as a public school teacher before her marriage.

Unable to spend more time at the easel, it took nearly a decade for Genevieve to feel confident enough to enter a juried exhibition in Chicago. To her delight, two of her pieces were selected to join those of other Brown County artists (including her husband) in the Hoosier Salon of 1937. Within two years, Genevieve was invited to mount a solo exhibition at an Indianapolis gallery.

An Indianapolis Star art critic wrote about the exhibit: “One can almost follow her advancement, step by step, through the few years since her first picture . . . The fact that Mr. Graf expressed a wish that one picture be marked ‘Not for Sale’ is still further evidence that it represents the wife’s first effort as a painter of still life.”

Carl Graf died rather abruptly of influenza in 1947 and Genevieve, once again, concentrated her care-giving energies on her older sister. She left Indianapolis for Nashville and became Marie’s housekeeper, but would commute to the capitol city to teach until her retirement in June of 1956.

“My sister was such a comfort to me, though she was a little younger than I,” Marie would write later. “She was mother and sister combined, and no one has ever given me such devotion as she gave.” Genevieve had more time to paint after her retirement, and would often walk the distance to her studio-home that Graf had built for them outside of town. She painted and exhibited in Brown County until her death at age seventy-one on December 21, 1961.

Marie wrote to a friend, “On December 20 at noon, Genevieve said that she wanted to go to her studio to finish packing some Christmas boxes and to bake some cookies or cake. I begged her to stay here, because it was rather cold. But this fall she had bought a Warm Morning stove for her studio. So Cari took her over. Several hours later I was busy trying to finish up my Christmas cards when Cari came in to tell me that he had found Genevieve unconscious on the kitchen floor. She had been about to mix up a cake, for all the ingredients were on the table. She was taken to the Franklin Hospital where she passed away at 2:30 the next morning.”

Forty-three years later, some still contemplate the promise of this woman who dedicated herself to others. Although she revealed considerable artistic talent, Genevieve Goth Graf’s primary role as caregiver consumed the bulk of her time. Many art collectors speculate that, had she spent more time at the easel, Genevieve’s paintings would have been truly exceptional.