The Art of Healing

Brown County’s artists have long been known for their generosity. From furnishing paintings for wards and lounges at Camp Atterbury during World War II to sharing their works with public libraries, local artists still offer their works for sale or auction to raise funds for various civic and social projects.

But in 1914 some of Brown County’s artists responded to a request for participation in a decidedly much larger project – murals. To celebrate the opening of new patient wings in Indianapolis’s General Hospital, now known as Wishard Memorial Hospital, artists from across Indiana worked together to paint more than a quarter of mile of murals to decorate these new facilities. The murals were designed, too, to raise the spirits of the patients. Among these noted Hoosier painters that included William Forsyth, Wayman Adams, William Scott and J. Ottis Adams was Brown County’s own T.C. Steele (1847–1926). 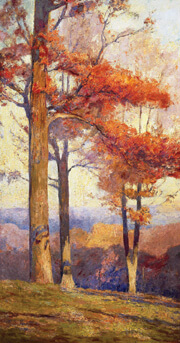 All agreed to work at the going rate for house painters at $75 to $100 a month. Many of the artists took up residence in quarters provided by the hospital and ate their meals there, too. Others, including Steele, worked on their contributions away from the hospital. Steele did his work in his Brown County studio. In all, more than 33 murals were completed and another twenty plus paintings donated. Brown County’s Carl Graf donated some of his work, one of which was designated for the African-American Women’s Unit.

One of the issues considered by the painters was whether to use lead-based paints. The decision was made not to use such paints because lead, when combined with sulfa rich air, caused the pigments to blacken. The sulfa in this case was due to the open-flame lighting of the time. So the works were done with a zinc-based paint featuring pastels. The works were painted on canvas mounted directly on the walls with a heavy mastic.

Over the years these murals and paintings have suffered from inattention and age. A current movement to fund the restoration of these works by Hoosier artists includes an exhibition at the Indiana Historical Society in Indianapolis titled “The Art of Healing.” These works, including those of T.C. Steele will be on display through June 6, 2004.

Works by Steele included in a calendar promoting the restoration program are a series of canvases featuring the four seasons, all intended for mounting in the Women’s Surgical Ward. These works contained scenes from Steele’s Brown County hilltop home and studio known as the House of the Singing Winds.

Steele’s widow, Selma Steele bequeathed the home and studio to the state of Indiana in 1945. Known as the T.C. Steele State Historic Site, guided tours are offered through the house and studio where changing exhibits display paintings done throughout Steele’s life. The site includes four hiking trails, the Dewar Log Cabin and the 90 acre Selma Steele Nature Preserve. Mrs. Steele’s gardens display a festival of flowers from spring to autumn. The Site is located 1 1/2 miles south of Belmont, off of State Road 46, nine miles west of Nashville and ten miles east of Bloomington. Steele’s house, studio and accompanying grounds are open to the public.

For more information about the exhibition call 800-447-1830 or visit <www.indianahistory.org>.