I’m self-taught,” says George Goehl, sculptor. “I enjoy working with metal.” Anyone who has encountered Goehl’s bicycles, leaf sculptures, or magic wands can attest to the enjoyment his work also gives its viewer.

Goehl has been living and working in the Nashville area since 1975 and has owned shops in Antique Alley and Calvin Place. Currently his work is displayed and sold at the Brown County Craft Gallery while he concentrates on his new enthusiasm—creating instructional videos at his workshop off Greasy Creek.

“When I first came here there were a hundred shops,” he observes while lighting his pipe. “Back in the 70s, early 80s, to come to Nashville was the thing to do. Today there many other things to do. I think that’s cut down on traffic a lot.

“On the other hand, be thankful for what we do get.”

As a young man George tried many jobs. “I got out of the service, worked in a factory, sold floor covering, then I decided that I would go to college,” he remembers. “I was 27, so I got me a Bachelor’s in Anthropology and a Master’s in Special Ed. and then I started running a program for the handicapped in Mansfield, Ohio. I really enjoyed that. Administration means you can make things happen.”

In his spare time he was making and selling jewelry. When the Lazarus department stores picked up his work, he tried making jewelry full time. He quickly “found out that I couldn’t make enough money doing jewelry. Somebody suggested wall pieces and that took off.” Soon his work came to the attention of Cosco Corporation, which had a decorative division, now called Hamilton Collections.

“Unfortunately,” he says, “they bought all my designs—and me—in ’73, just when the oil embargo happened. Also, I’m not a corporate person. They honestly expected me to be at work on time and wear a white shirt and tie! They were a great company to work for but it didn’t work out for me. So I opened a shop in Nashville. 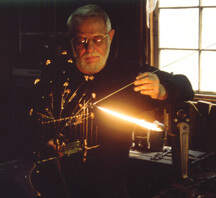 “I never worked at any job longer than three years. Boredom would set in and I would move on to something else. But, creatively working with metal has held my interest and kept me challenged. I do a lot of the same stuff but always try to have some new things.”

His most popular designs are bicycle sculptures—racers, bucolic scenes in a park, and large wheeled ordinaries. Another favorite design was inspired by the gift of a friend. “We used to kayak together and on my birthday we got out in the middle of Lake Monroe and she gave me a bubble wand. I was thinking, ‘I can do better than that.’ I had a show coming up and nothing to take so I thought, ‘I’ll make some of these bubble wands.’”

At the show, he set out his wands and two five-gallon buckets of soap and water for people to test his creations. He soon discovered that everybody had their own recipe for the perfect soap solution. “I had no idea how particular some people are,” he says, amazed. George prefers a 50/50 solution of Dawn and water with maybe a little glycerin mixed in. “Somebody told me a tiny little bit of Karo syrup will give it more body—of course it’s sticky.

“The thing I like about doing the bubble wands is they’re all different. I work strictly with circles. It’s amazing the designs you can come up with circles.”

Goehl has an intense curiosity for how a complex process works, whether it’s creating sculpture or producing instructional videos. The videos, which he distributes nationwide, are on a subject he’s very familiar with—metal sculpture. “Those who are interested can pick up where I leave off without having to learn so much by trial and error,” he says. “There aren’t that many people that are going to do metal sculpture but there’s enough to make it worth my while. Plus, I enjoy doing it. I enjoy working out all those little challenges and problems.”

Another enthusiasm is the Internet. “I like computers, I really do. I find it challenging.” Goehl built his own website where he cultivates the market for his sculptures and videos. Often he’s found by, “people that no way in the world would have ever found me without a website.”

Considering his streak of individuality, its not surprising that what George likes about Brown County is it’s independence. “All kinds of people live here,” he says, “with different lifestyles. There is freedom to be whoever you want to be.”

Also he notes that “when you go to the post office you know everybody. People are a lot more relaxed here. If you look downtown and see somebody all dressed up it looks a little out of place.

“I like the fact that people wave at me when they drive by,” he adds. “It’s a good place to live.”

You can find George Goehl’s work at the Brown County Craft Gallery and on his website at <www.browncountycopper.com>.