Many places have been called the Bluegrass Capital of the World, but Bean Blossom deserves the title as much as any for hosting the world’s longest-running bluegrass festival. Now Bean Blossom will expand its traditional music empire with a completely new festival on May13th: the Bean Blossom Olde-Tyme Music Festival.

The Olde-Tyme Music Festival will run from Thursday, May 13th through Saturday, May 15th at Bill Monroe’s Memorial Music Park on State Road 135 North in Bean Blossom, Indiana. Shows begin at noon on Thursday and Friday, 11:00 a.m. on Saturday, and run into late evening each night.

Making its debut one month before the 38th Annual Bill Monroe Bean Blossom Bluegrass Festival in mid-June, the Olde-Tyme Music Festival will spotlight the variety of traditional American music beyond bluegrass. It is likely, though, that some bluegrass will be heard, considering that a number of the scheduled artists have made bluegrass recordings or are recipients of bluegrass music awards.

Bean Blossom’s Tim Cahall says the inspiration for the new festival came from the park’s already-established reputation for bringing roots music to the area. “Old-timey has a lot of the older, more traditional bluegrass in it and there seems to be a resurgence of interest in it,” he says.

Whereas bluegrass is a more tightly defined genre of music associated with the style of its originator, Bill Monroe, old-time (or old-timey) music encompasses a range of traditional music forms created by all sorts of jug bands, string bands and soloists.

Bluegrass has enjoyed a renaissance in recent years and now old-time music seems poised for popular rediscovery. From the Lovin’ Spoonful’s 1966 ode to “Jug Band Music” to the Hee-Haw success of Grandpa Jones, awareness of old time music has bubbled up into the pop culture from time to time. Through it all, the music has consistently garnered a small but devoted audience attracted to its unvarnished charm and steadfast resistance to commercial pressures. 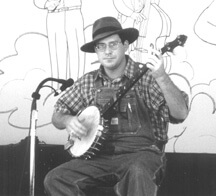 The foundations of old-time music are acoustic instrumentation and the preservation of folk music traditions exemplified in the early days of the recording era by artists such as the Skillet Lickers, Uncle Dave Macon, the Carter Family and Fiddlin’ John Carson. Anyone familiar with those artists knows that their music is quite diverse, from the banjo-propelled hillbilly humor of Uncle Dave to the haunting Appalachian harmonies of the Carters.

That diversity is reflected in the roster of Bean Blossom’s Olde-Tyme Music Festival. Unlike bluegrass, which has a few major-label recording artists such as Ralph Stanley and Alison Krauss who enjoy high profiles, old-time music occupies a more specialized niche. As a result, casual music listeners may not recognize many of the names on the festival’s roster, but rest assured that there is no shortage of old-fashioned entertainment and talent on offer.

A few of the acts scheduled to perform include clawhammer-style banjoist Mark Johnson and mandolin player Emery Lester, who will perform all three nights. Rounder Records recording artist Leroy Troy, who is something of a latter-day Uncle Dave Macon, will perform solo on two nights and also with the Tennessee Mafia Jug Band. The Tennessee Mafia has played the Ryman Auditorium in Nashville, Tennessee, with Marty Stuart and is certain to put on a fun show.

The Steep Canyon Rangers, a young group from North Carolina that performs mostly original material in the old-time tradition, is appearing on the first night of the concert series, and the Crooked Jades—who have released three critically acclaimed albums on Virginia’s Copper Creek label—will perform on Friday night.

The Lost Mill String Band, the Hammer Dan String Band and the Jeff & Vida Band also appear on the roster, as do the groups Zoe Speaks and Uncle Earl, banjoist Dan Gellert, and others.

Cahall invites everyone out to experience the “rebirth of old-timey music” at the first Old-Tyme Music Festival. The park intends to make the Olde-Tyme Music Festival an annual event, and interested music-lovers can do their part to support this unique endeavor by turning out and showing that real old-time music has a home in Indiana.

As with Bean Blossom’s bluegrass festivals, there will be a variety of food and craft vendors, camping and shuttle service, and free admission (with festival ticket purchase) to Uncle Pen’s Cabin and the Bluegrass Museum and Hall of Fame. Festival attendees are encouraged to bring lawn chairs for the outdoor amphitheater, where the concerts will take place rain or shine.

Ticket prices range from $20 to $30 per night or are available at a discounted three-day combo rate for $65. Children 12 and under are admitted free with an adult. For more information or to purchase tickets call