Like many a good thing, it started as an accident. Bob Kirlin, who had been thinking about ways to honor the 100th anniversary of Abe Martin, was going through some paperwork when a brochure fell out of the pile. The brochure had come with the late David Hawes’s tape of his one man Abe Martin performance. “At the bottom of the brochure it said that there was a musical play that’s never been performed, written by Hawes and Al Cobine,” says Kirlin.

That was the beginning of the Theatre of Brown County’s production of Abe Martin’s Dinger of a Day, an original musical comedy, to be performed on November 19th, 20th and 21st at the Brown County Playhouse.

Kirlin quickly contacted the Cobine household where he discovered that the Singing Hoosiers had performed a short version of the musical in 1989 at Indiana University. Upon hearing a tape of the performance he, “fell in love with it. It was just unbelievable.” At first he didn’t know what to do with the windfall. “I struggled, but I knew that this had to be performed.” Kirlin played the tape for Doug May and asked him what he thought.

May, who has directed hundreds of shows for the Disney Corporation, “ranging from the Animal Kingdom, Magic Kingdom, Little Mermaid, Christmas parades, daily parades, fireworks shows—you name it,” was initially hesitant but, “the more I listened to the music the more excited I became. I realized that we had the potential here to do something fun.”

“I’ll never forget it as long as I live,” says Kirlin. “From there everything fell into place.”

Bob then took his tape to Ray Laffin, who conducts the Brown County Community Band. “I said, ‘Ray, here’s the tape. Do you want to produce this?’ He came back to me and he said, ‘We can do it.’”

Kirlin also took his tape to Andy Rogers. “Andy, of course, is an Abe Martin junkie. I played him some of the music and told him about the play. He said, ‘I think it’s great!’ I said, ‘Good, we’ve only got one problem. Where are we going to put it on?’ He suggested the Brown County Playhouse. So it fell together. I’m 62 years old and it’s one of the most exciting things I have ever been involved in.” 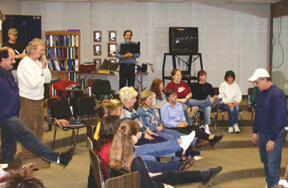 The story is about one day in the life of Bloom Center, a small and remote southern Indiana community in the early days of the 20th century. It’s election time and Mame Moon has challenged Newt Plum for sheriff of the county. The story takes a Romeo and Juliet turn as youngsters Ned Plum and Mary Moon profess their love in the midst of the heated political battle. All the while Abe Martin provides colorful commentary peppered with wry wit and salted with sage observation.

Bloom Center, and its most famous resident philosopher Abe Martin, are the creations of Kin Hubbard, the fabled Indiana humorist whose cartoons ran in the Indianapolis Star and over 300 syndicated newspapers for more than three decades. His inspirations for Bloom Center and its colorful characters were his hometown of Bellefontaine, Ohio and Brown County, Indiana.

“The dialogue was written by David Hawes, Professor Emeritus of Performing Arts at Indiana University,” says Kirlin, “and the music was written by Al Cobine, who was a graduate of the School of Music. Al is a very fine musician, composer, and arranger. He still lives in Bloomington. For many years he performed with the Henry Mancini orchestra and has worked with many great musicians.” 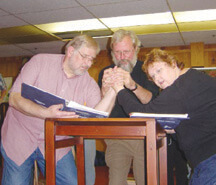 “Al’s writing sounds real big even though it’s performed by a small group of individuals,” adds Ray Laffin. “That’s some of the talent that he has. We have ten members in the pit band doing the accompaniment. They are all Brown County individuals who play in our community band.

“We started rehearsals with the chorus in July. It’s a lot of work but very enjoyable. The whole group has a great positive attitude and works hard. It’s going to be a great production,” Laffin says.

“The amazing part,” says Kirlin, “were the tryouts. There’s a lot of talent out there. I cannot say enough about Ray and Doug, and the community really went to bat. You can tell I’m excited,” he laughs.

“The wisdom of Kin Hubbard’s age is no different from the wisdom of today,” he goes on. “Common sense is common sense and that doesn’t change. The humor has changed a little but in reality the message has not changed.

“One of the fascinating parts I found when I was doing the research process is that Hubbard wanted to be a vaudeville performer. That was one of his dreams. We’re playing this show as a vaudeville show. His writing lends itself to that. I think that’s a great tribute to Kin Hubbard. He would have loved to see his work presented in the vaudeville fashion because his heart was there.”

Jenni Voris is the show’s choreographer with Larry Voris in charge of set design, props and construction. Costumes are in the capable hands of theater veteran Vicki May. The production stage manager is Susan Christenberry. Blake Wolpert stars as the venerable Abe Martin. Jim and Jane Smidebush play antagonists Newt Plum and Mame Moon, while Jeff and Rhea Ellen Boley appear as Ezra and Grandma Pash. Tunes include Welcome to Bloom Valley; an elaborate barn dance with dancing and singing called Saturday Night; and the title song Dinger of the Day.

“The Playhouse is a great facility,” concludes Doug May. “It’s very flexible, comfortable and truly a professional house.”

Special lodging rates and packages for that November weekend are offered by the Brown County Inn, Artists Colony Inn, and the Overlook Lodge at Salt Creek Golf Retreat.