Rustic tones of banjos, fiddles and mandolins will herald the first days of autumn as the Bill Monroe Memorial Music Park presents its 30th Annual Uncle Pen Days Festival from September 22nd–25th. Over 25 bluegrass groups are scheduled to perform throughout four days of music featuring some of the finest bluegrass artists in the country.

Mild weather and good old-fashioned music amid the tree-lined hills of southern Indiana make the Uncle Pen Days Festival a bucolic treat for music and nature lovers. Bluegrass star-power is another enticement, with J.D. Crowe, Rhonda Vincent, Charlie Waller and the Country Gentlemen, Paul Williams, and many others on the schedule.

Rhonda Vincent is one of few female lead singers in bluegrass, and has won the International Bluegrass Music Association (IBMA) Female Vocalist of the Year award four times. She also plays mandolin and fiddle, and began her recording career as a child with her family’s group, the Sally Mountain Show. Now she is a popular Rounder Records recording artist and has performed with dozens of country and bluegrass stars including Dolly Parton, Pam Tillis, Randy Travis and Ralph Stanley.

The festival is being presented by IIIrd Tyme Out, originally comprised of members from the groups of J.D. Crowe and Doyle Lawson, among others. This award-winning ensemble took the IBMA Vocal Group of the Year award for seven consecutive years, and will perform at Uncle Pen Days three of the four days.

Bill Monroe’s son James Monroe and his band the Midnight Ramblers will carry on the family tradition with two weekend sets. Veteran hit-maker and recording artist Jimmy Martin assumes the role of bluegrass elder statesman—a symbol of bluegrass music’s emphasis on tradition and a direct link to its past. Martin will be joined onstage by Gary Brewer, whose song “Jimmy Martin Songs for Dinner” was an IBMA Song of the Year finalist.

There has been a flurry of festivals at the music park since Our Brown County covered the Gospel Jamboree in last month’s issue. The 1st Annual Hippy Hill Hoodang was staged in late August, and the 6th Annual Blues Fest runs from September 10–12. Now Uncle Pen Days marks a return to the bluegrass music with which the park is most strongly associated.

The Uncle Pen Days Festival is one of the park’s flagship events, commemorating Bill Monroe’s Uncle Pendleton Vandiver, a fiddle player who inspired Monroe to play music. The park grounds are home to Uncle Pen’s Cabin, the one-room cabin where Vandiver lived. The historic cabin is open to the public and admission is free to festival attendees.

This year’s Uncle Pen Days Festival coincides with the induction of Larry Sparks and the Lonesome Ramblers into the Bluegrass Hall of Fame, which Monroe founded nearly 20 years ago to recognize important and influential artists in the field of bluegrass music. Sparks’s induction ceremony will take place on Friday the 24th, and will include a special reunion of the band with original members Wendy Miller and Mike Lilly, on mandolin and banjo respectively. 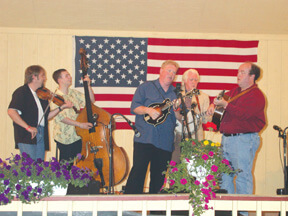 J.D. Crowe and the New South

Sparks performed with Ralph Stanley and The Clinch Mountain Boys in the late 1960s before forming the Lonesome Ramblers in 1969. Wendy Miller and Mike Lilly, esteemed for their flashy playing, were in this early incarnation of the Ramblers. Today Sparks is regarded as one of the greatest of all the second-generation bluegrass artists.

The outdoor wooded amphitheater and park offer a wide range of activities for the entire family. The festival site provides much more than a mere concert—it’s a veritable holiday retreat with opportunities for hiking, fishing and camping.

Other attractions include a flea market, food and souvenir vendors, a fitness trail, music and instrument workshops, and the Bill Monroe Museum. Budding bluegrass pickers are invited to bring their instruments for the many impromptu and organized jams.