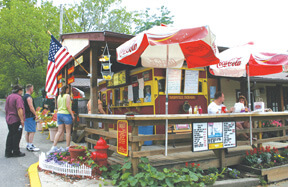 One of the joys of dining “al fresco,” or “in the open air” is the entertainment value of observing all that surrounds and enhances our dining experience.

There are a few choice places for enjoying outdoor dining around Nashville, each with its own special qualities, but my curiosity led me to an unusual venue tucked away up on the north end of Van Buren Street for a particular reason.

I had wondered about the many different locations around town where one could observe solo middle aged men sitting and reading, contemplating, or merely staring off into space.

Had they made the arduous pilgrimage to Indiana’s loveliest village only to sit and take in the air? Were they merely chauffeurs for shopping wives? Had they been reduced to mere window shoppers in the open-air bazaar of life?

I asked a friend about this phenomenon and he replied knowingly and without hesitation, “They’re people-watchers.”

Ah, yes, the observational student of human nature. What, indeed is more interesting to us than our fellow people, in all their varied and various permutations, with all of their individual attitudes and agendas, and especially as they careen about town in the classic ages-old posture of the hunter-gatherer; an identity hidden deep within each of our human psyches.

Thus intrigued with the opportunity to study a random sampling of mankind and have a good meal, I took myself “uptown” to the northeast corner of Van Buren and Gould streets, to feed both my curiosity and my stomach at Trolly’s, among the most unusual and satisfying dining opportunities in town.

Because, as the name implies, Trolly’s is a sidewalk hot dog and barbecue stand built around an old-fashioned trolly car.

When I say old-fashioned, I do not mean merely antique; this particular trolly car predates the electric-powered city street cars that once ran the routes in Indianapolis and can be seen here and there; this trolley is an original, horse-drawn “bob-tailed” trolley car that once plied the rails of Toledo, Ohio. The trolly was acquired and restored in the 1960s and then moved to Nashville in the late 1980s.

According to owner Alan Everroad the antique conveyance came into his possession after the original owner tangled with the town over rights of way, property lines, and other considerations.

Everroad had the means to create dining pleasure for the everyday passer-by in the form of two culinary secrets: a special, original, homemade Coney sauce, passed down through family connections from his wife’s grandmother; and the mystical barbecue ingredients of the Deep South shared by a Mississippi man. Everroad, lured by the smell and tantalized by the unique and pungent taste of the black man’s barbecue, descended into addiction and discipleship.

Patrons may add their own sauce to the pulled pork barbecue sandwiches, or indulge in the classic foot-long hotdog with grandma’s special Coney sauce and a variety of toppings. “Everything is fresh and home-made except for the cheese sauce,” said the proprietor.

Everroad also has another tool at his disposal—the lure of smell which had first drawn him into the barbecue business. “We get fresh-cut hams at a small, local butcher shop and smoke them right out back,” he said. “I’ve had guys come up to the window and say, ‘Man, I’ve been smelling that smell all day and looking for you all over town’.” Look for the sign that says “Good Food Is Always Cookin’,”at the yellow and red stand just downhill from the Pioneer Village Museum.

There are bratwursts, of course, and big, juicy Italian sausage sandwiches and sloppy Joe’s and all the usual sides, trimmings and fixings. Another specialty at Trolly’s is the fresh-squeezed lemon shake-up, a sure balm for too-hot summer afternoons.

And there are benches on the sidewalk outside the trolley station where the train never moves; a chance to rest one’s feet in the headlong pursuit of Nashville shopping, a place to sit and slowly savor a little bit of heaven on a bun and an icy fruit concoction.

There is time to look around and take in the whole puzzlement and wonder of the human race on the hoof, in the flesh, as it exists today.

A group of middle-aged sisters cross the street, looks and gestures revealing their genetic similarities. A young family passes on the opposite street with a child, a toddler and two babies in a double-decker stroller. On the opposite corner, a woman clutches her treasure—some kind of barn board and barbed wire sculpture with an Abe Martin theme.

I try to pace myself on the barbecue, but its no good; I wolf it down like a son of the south suddenly encountering a taste of distant home.

I suck down the shake-up and crunch the ice in my teeth as a whole world of visitors parades by, each with some a unique story to reveal and, for all I know, something hidden deep inside.

And I am a profoundly satisfied man….