Stephen Cale doesn’t always stop when he sees a good subject to photograph. But he does come back, several times if necessary, until he’s got the picture he wants.

Steve is a field scientist working for the Indiana State Department of Health. “I assist local health departments with their septic programs in southeastern Indiana,” he says. He gets to drive to work through the beautiful southern Indiana hills. “It’s wonderful getting there,” he says. “The shame is that I have to stop and ruin someone’s day by telling them their septic system is failing.”

Cale grew up in Indianapolis but moved to Brown County thanks in part to his youthful fascination with the Davy Crockett television series. “Many times in my life I’ve felt I was born in the wrong century,” he says. “I needed to be off in the woods living in a log cabin. By 1984 I found one that I could afford and ran away from the big city and came down here. I’ve been working on that log cabin ever since,” he laughs.

Cale has an older brother to thank for his interest in photography. “He’s twelve years older and a professional photographer. One of my neighbors happened to mention to the publications director of Broad Ripple High School that Bill Cale’s little brother was coming to school there and she said, ‘Is he a photographer?’ Like it runs in the family.

“At the time I didn’t know very much about photography. I’d used a Brownie Starflash,” he sighs. “I kind of got pressured into it a little bit. Fortunately I was able to call my brother. He would describe everything I needed to do over the phone. I took notes and learned quite a bit.”

What he learned he took into the Air Force where he worked at the Special Projects Production Facility involved in the research and development of advanced photographic reconnaissance techniques. “Eastman-Kodak and the Air Force had partnered to come up with special emulsions and special processes for film to get more detail in their photos. They took photography from an art form and made it science. I learned a lot about films and emulsions. It helped me out later when I wanted to manipulate films and get different effects by tinkering with developing formulas.”

After the Service came a fifteen-year fallow period for Steve creatively until one day when his wife was admiring some pictures of the family he had taken. “She said, ‘Why don’t you spend more time with this?’ So I did,” he smiles.

“I got back into photography and started reading about various techniques and little light bulbs would go off and things were less of a mystery to me. I visualized more because I’d been through it in a laboratory I could have never afforded to own.” 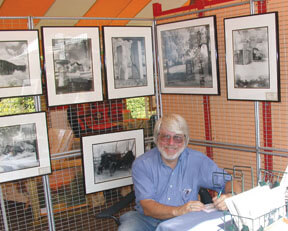 Steve started “tinkering” with black and white photography after viewing a friend’s collection of Frank Hohenberger’s Brown County prints. He also began using infrared film. “You’re revealing wavelengths that the human eye cannot see,” he says. “For example, when you see an infrared shot of the trees and all the leaves look white it’s because the foliage is giving off an awful lot of energy through photosynthesis. The camera is able to see that.”

He uses his “old friends” when he goes out to shoot. “Vintage cameras that I have lying on the shelf. One is an old twin lens Roloflex I got when I was still in high school and kept all these years. It’s a wonderful little image producer.”

Steve’s mission is to record the things that are quickly disappearing from our landscape—trees and woods, homes and buildings. “I love to take shots of rusty old cars in the weeds,” he says, smiling “There’ll be plenty of times I’ll be driving along and notice something and say, ‘That will make a good photograph.’ I’m continually looking for images and when I’ve got a free weekend my wife and I go off to various places that I’ve seen. I try to step back in time, capture things before they either fall down, burn down, or get torn down.”

Cale’s photography has won numerous awards including five in two years at the Indiana State Fair, first place in the 1996 Indiana Heritage Arts competition, and “Best of Photography” at the 2001 Carmel International Art Festival. His work can be found at the Figtree Gallery and Coffee Shop in Helmsburg and at T.J. and Cath’s Café in downtown Nashville. Steve also sells his work at area art festivals.