My great-great-grandfather came here about 1842 or 1838, somewhere right in there,” Charles “Buzz” King says from his snug den in Nashville. “Not with the first settlers, but close. My great-grandfather, Henry W. King, was in the Civil War. My dad’s dad was an insurance salesman, traveled a lot. We’ve been here a while.”

It would be easy to say that King has forgotten more Brown County history than most people know except that he hasn’t forgotten anything. The son of local historian Fred King, he grew up a stone’s throw from Blood Alley, with family friends like C. Carey Cloud and Frank Hohenberger.

“I was born on his birthday,” he says, remembering the special bond he had with Hohenberger. Every holiday the photographer would drop by with a Christmas gift for the boy. “Frank liked Chiclets. At Christmas he would bring me a whole box of 24-packs of Chiclets. Always looked forward to that because I liked Chiclets, too.” He also gave young Buzz a “Christmas book” every year from a collector’s series. Buzz also acquired Hohenberger’s address books filled with articles and clippings he’d saved from the newspapers. “He would see something interesting in the paper and cut out a saying or phrase. They’re hilarious. I have a whole collection of those somewhere,” King smiles. “He was quite a guy.”

The photographs Hohenberger recorded, and the stories and gossip he collected, are priceless relics from the early 20th century. “Well, we look at him that way,” King allows. “I’m not sure the rest of the world does. Locally he’s the one that reported the changes in the history of Brown County. Pictures of falling down houses, and dogs, and all kinds of things that no one else would have thought of. But he saw a picture and recorded it.” 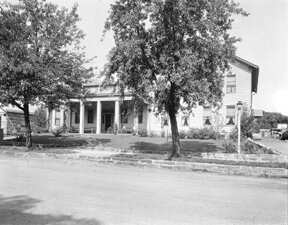 A Frank Hohenberger photo of the original Nashville House from Buzz King’s album.

King dismisses the notion that Hohenberger stirred up animosity with his depiction of county life. “Frank was pretty sensitive to that, but he did take lots of pictures of people that obviously were not the top of the pile. They were interesting to him. He could have had criticism, but not as much as Kin Hubbard had for Abe Martin. There are still some people today that don’t like that.”

King serves the community by sitting on the Nashville Plan Commission, the Town Council, and by protecting and extending his father’s legacy.

“My dad knew a lot. He was in the postal service and knew everybody. Before that he had been a probation officer and worked for the courts in the county. He met the people and saw how they lived. I always wanted to get a tape recorder and record his stories but after his stroke he couldn’t talk well enough to do it. Fortunately there are two or three tapes that the Historical Society has. Those are wonderful.”

King’s own perspective is from the late 1940s and early 1950s. “There was a lot in the county that’s come and gone,” he laments. “We used to have a guy who’d drive his farm wagon up the street and sing out. Mom would come out and buy whatever he had—vegetables in season, and fruits. Mom got her chickens live and would kill them out in the back yard. Fry ’em up. Every Sunday we had either relatives or friends to Sunday meal in that house.

“I get pleasure out of the stories from before,” he goes on. “Like electricity. The town had its own generator behind where the Lexington House is. It had a great big flywheel. They’d get that going and it supplied electricity to the town. It was on all day Monday so people could do their laundry and from five to ten every night. Saturday it was on from noon and when the movie house was open.”

The reason that the railroad never came through Nashville sounds like a 19th century precursor to the controversy surrounding I-69. “You’ve got to remember how dirty and smelly and noisy railroads were. People in the town just wouldn’t have it. So they settled on going through the valley by Helmsburg. It was a big deal, big fight.

“I don’t know if you’ve ever noticed,” Buzz adds. “Especially in the winter, you can hear the train whistle right here in Nashville. It just echoes down that valley.”

Ever his father’s son, it’s important to King that history be passed down accurately, such as that of Blood Alley. “There are two or three stories on how it was named,” he says. “I prefer the gory one about the blood running down the alley when it rains but the one that is sworn to be true is that it was just bad blood between neighbors. In other words they were fighting all the time. That’s how it got the name. No physical blood running down the alley.”

He knows for sure that it wasn’t located behind the old Bond Funeral Home on Johnson Street as some have reported. He knows because he was there. “That’s not Blood Alley,” he says emphatically. “Blood Alley is right over here.” (Between Franklin and Washington, near Jackson Branch Creek.) “That’s what we called it when we were little. It’s called Sycamore now.”

Nevertheless, the story about the funeral home is a macabre one. “You could stand at the end of the drainage ditch at the end of Johnson Street—the main drain through town—and watch the blood come out when they had somebody,” he remembers. “We did that as kids. My parents used to get so mad, ‘Get away from there!’

“We had a lot of interesting people live here over the years,” Buzz finishes. “It’s a unique place to live. I’m glad that so many people find it interesting and come to visit.”