The Hendersons of
Hickory Hill Studio

When Joe Henderson was leaving his bus driver job in Columbus many years ago, he had no way of knowing that he was about to meet his future wife. But that is how it happened that Joe, now a woodworker, met Peggy Seitz, now a basket weaver, when she came to replace him at his job.

“Things have worked out pretty well”, said Joe who recently became a grandfather after twenty-three years of marriage. “Years go by pretty quick!”

These Brown County artists now live in a masterpiece quality home and are widely known for their exceptionally beautiful baskets and wood products. Joe started out as a carpenter in Brown County about 24 years ago then gradually started doing finish trim work. Eventually he built a shop making furniture and now concentrates on art pieces.

“I can do more work this way,” Joe said. “Not doing custom work, now I can depend on my own imagination a little more. I concentrate on a series of wall clocks. My clocks are free form with no templates or patterns involved. Each a little different, they are based on a tear drop shape.”

“I use cherry, walnut and even myrtle from the Pacific Northwest. I use veneer cores…big root burls,” explained Joe. “I get California English walnut and Redwood. Some pieces have interesting speckles from root sections with decay. I might use a piece of Elm from down the road. I leave some cambium wood sometimes because of the patterns.” 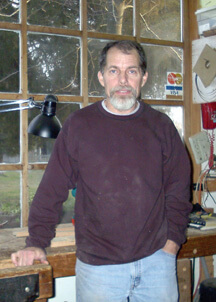 Joe began chopping beautiful bowls out by hand. As he ages he is doing less handwork and more machine work but still finishing them all by hand. He hasn’t made bowls since summer.

“I still use chisels on little case clocks”, said Joe. “I have tools from my grandpa and my dad who built houses when I was growing up. I picked up my carpentry skills from him. Some of my favorite tools are really old tools that still work.”

Joe, father of nineteen year old Jesse and twenty-four year old Sawyer, is making Jesse a coffee table. Jesse works in Columbus and is a musician. Sawyer did quite a bit of work in the shop. Joe misses his help and says he doesn’t get nearly as much done now.

Joe, who was born around New Castle, came here about 26 years ago after his parents retired to Brown County.

“My dad was a commercial artist and my mom a portrait artist,” said Joe. “I came to visit and liked it so much I stayed. My mom is still here but my dad died. They built a place up by Lick Creek. I lived a lot of places but when I came to Brown County I did not want to go anywhere else.”

Besides New Castle and Brown County, Joe has lived in Toledo, Chicago, Houston, and Dallas.

Joe and Peggy built their colonial style Brand Hollow Road home in a year on forty acres after Peggy did extensive research to educate herself on the basics. Called “Hickory Hill Studios”, the house is made of all Brown County wood sawed from logs by local sawyer Dave Keene.

“We went to look at actual structures in Williamsburg and Sturbridge Village. We built a full center hall Cape,” said Peggy. “We moved in 1993.”

Furnished with beautiful art and craft works made by the Hendersons and artist friends, the house was expanded by adding a porch and swimming pool.

“The very first thing I made was a market basket, just to learn basic structure,” said Peggy. “My style evolved from a real simple shape to more involved shapes then I started using color. I like a lot of color. Solid color.” 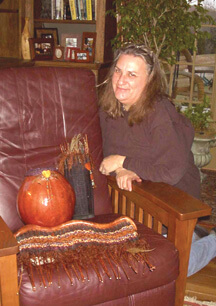 About 5 years ago Peggy got the idea of making wooden lids for the baskets. She and Joe often collaborate on pieces.

“I started making a basket using an antler Sawyer gave me”, said Peggy who has been weaving for almost nineteen years. “I use beads, stones and gems. I really like color and texture. I am still getting excited about putting things together. All the little embellishments and textures makes it really fun. I feel pretty blessed that I have been able to make a living doing this.”

“Mother and Daddy lived below Elkinsville and Grandma and Grandpa lived on Blue Creek,” said Peggy. “Daddy was a Seitz, and Mom was a Wilkerson. We moved to Bellesville Road in Bartholomew County when I was a year old. Later I moved back out here.

The Hendersons’ work may be seen in Nashville at the Brown County Craft Gallery and at Spears Gallery on Highway 135 South.