Not Enough About
Lou Stant

It’s been five years since we last talked with Lou Stant. Since then he’s continued writing music and performing in Brown County. He recently produced a new CD: Enough about me. “I’ve been trying to increase my skill level as a performer,” he says. He’s also, “been raising three kids and working full time.”

Family is important to Stant who moved to Brown County from Indianapolis in 1996 to get his family away from the corrosive influence of city life. “This is a good place to raise kids,” he says thankfully.

Lou is a case manager with the Medicaid Waiver. “I’m the person who coordinates the team that delivers Medicaid services,” he says. “I write the plans that go to the state for approval. There’s been a trend towards taking people out of institutions and serving them in community settings. The funding stream that provides for these people is called the Medicaid Waiver.”

Stant doesn’t cheat his family when it comes to his career in music. “I don’t want to become an absentee father,” he says, explaining why he doesn’t tour.

A storyteller, by nature and inclination, Lou’s songs explore people and their interrelationships in a way that is recognizable, humorous, subtle, scary and personal. Favorites include the bureaucrat putting a difficult patron in his place; a ne’er do well promising his long suffering family from a jail cell that “I’m ready to change”; a psychiatric patient foregoing his meds in order to see the world in all its gaudy colors; an orangutan contemplating his disappearing forest; and a loving tribute to an irascible grandmother. 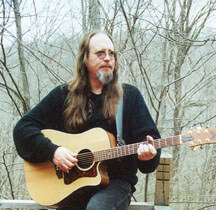 The title song Enough about me is a collaboration with his long-time friend Tim Ballew. “It’s a little bit unusual and disturbing in parts,” he smiles. “That’s the way Tim writes. That one grabbed me and I felt like I had to put it to music. Sweethearts Again was done by Dorothy Shay way back in the late-40s. She was known as the ‘Park Avenue hillbilly.’ She did a lot of novelty type stuff. She would sing with Spike Jones, people like that. That was one of her best songs.”

Repo Man was inspired by reading the Brown CountyDemocrat. “I don’t know what it is about newspaper articles but sometimes they just get the wheels spinning,” he says. “The Check’s in the Mail is about people who are ambivalent about human relationships. They’re ambivalent parents, ambivalent spouses. There is a disconnect when it comes to their sense of commitment or responsibility.

“People are going to hear the last line of the song ‘… the check’s in the mail, … I hope you take some of that money … and bail me out of jail’ … and think, ‘This guy is a creep!’ But some people are going to think that maybe the guy does have some redeeming value and maybe he’s serious about some of what he says. The interesting things about that song is the different reactions people get about how they feel.”

Grover Parido, who lives in Hamilton County north of Indianapolis, produced Enough about me. “He’s been recording for years but never taken on something with this kind of scope,” Lou says. Parido plays cello in the popular Indianapolis progressive bluegrass band Blueprint Music. “He and I collaborate very well together. He’s one of these people that,” Lou pauses to gather strength for his next statement. “He’s not aware of how talented he is. He brings a lot to bear. He put his mark throughout here with his cello playing, his bass playing, and keyboard.

“We invited the best musicians we knew from both locations. Stylistically it’s more diverse—jazz, bluegrass, folk, rock—all kinds of different influences. It’s still very much my style but more out there. The morose hasn’t left,” Stant laughs. “But there’s a bit more humor in this one.

“I feel like I’ve carried the solo artist bit as far as I can,” Lou continues. “I miss the feeling of playing with other musicians. I was tickled pink at being able to work with some of the great local musicians, people whose music I admire. Mel Chance, who’s part of the Brown County Community Band, played clarinet and saxophone. John Whitcomb is one of these great guitar players. Jamey Reid is a phenomenal percussionist. He’s been touring with Bob Lucas. I had the pleasure of working with Slats Klug and Robbie Bowden. Outstanding musicians.”

Other musicians who helped out include Doug Sauter of Blueprint Music, Don Jenkins, Grey Larsen, Taylor Hatfield, and Cathy Perido, who wrote and sang background vocals. “Cathy was our sounding board,” he adds.

“There’s always going to be a market for storytelling and character development whether you’re writing songs or short stories or novels or whatever,” he continues. The Internet and mass media have watered down people’s tastes but some people are tired of the same stuff over and over and they’re hungry for meaning. People who respond to what I do in shows and to my recordings don’t say, ‘Oh, yeah! I’ve heard that.’ It’s more like, ‘—Oh! This is kind of unusual.’

“When you get in front of an audience that’s interested in what you have to say it’s infectious. There’s nothing quite like it.”

Lou Stant will be performing at Harvest Moon in Nashville on Saturday July 2 and Friday August 5 from 6:00 to 9:00 p.m. The Enough about me CD release party is at the Brown County Library on July 23 from 1:30 to 4:30 p.m. Refreshments will be served. CDs can be purchased at Mountain Made Music in Nashville and at Indy CDs and Vinyl in Broad Ripple.