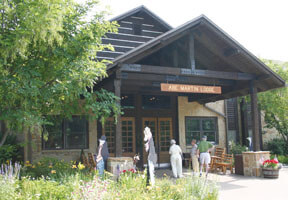 They say that in the restaurant business, location is everything, and surely there could be no finer location for dining out than within the confines of the Brown County State Park at the Abe Martin Lodge.

Abe Martin Lodge is centrally located in the state’s largest park, among 15,000 acres of wooded splendor.

Built in 1932 of hand-hewn native stone and oak timbers cut in the park, the Lodge has two spacious and comfortable lobbies with two fireplaces and a rustic dining room makes eating a pleasure.

I ventured forth for a state park repast on a weeknight, passing over the more popular Friday and Saturday night buffets of seafood and prime rib, respectively, with a taste toward plumbing the restaurant’s regular, everyday menu.

For companionship, I brought along a friend and her attractive teenaged daughter, a move that proved fortuitous after our young waiter appeared to serve our dining needs.

The menu was simple but complete; surely no substitute for a full buffet, but completely adequate, nonetheless.

I ordered the half-pound fried chicken dinner, with mashed potatoes and gravy, for which the Lodge is rightly recognized around the nation and, I suppose, around the world.

My charming companion had the catfish dinner, another perennial favorite.

Each came with soup—a tasty bean and ham offering, and a good, full salad bar, which risked filling me up before the main course arrived.

When it did, three large pieces of golden brown chicken with corn and potatoes, along with the signature fried biscuits and apple butter, I settled in for a feast of Sunday afternoon proportions.

I once heard a gaggle of old southern preachers discussing the rigors of their earlier days, and one of them said, “Back in the old days, when a young man thought perhaps he was receiving the call to ministry, the examining committee would sit him down and ask him one very serious question, ‘Do you love fried chicken and crave it for every meal, morning noon and night, from this day forward?’”

In those earlier times and rural confines, chicken was the only special meal readily available to the rural homemaker, and so whenever the preacher came, fried chicken was on the menu.

There are, of course, many other moral and religious items of conviction involved, and, anyway, in this day and age, a Baptist preacher doesn’t get as much fried chicken as he once did, and, when he does, it is more often than not “store bought’n” as Abe Martin might say.

The catfish was light and tender, perfectly breaded and delicious. With cole slaw and green beans, it made a perfect evening meal.

The teenager ordered from “Anne Nugent’s Sandwiches” and (of course) ordered the quarter pound cheeseburger from a long list that included broiled chicken breast, barbecued pork, ham and Swiss, grilled turkey, and even a Reuben

Sandwiches are served with lettuce, tomato, onion, pickle, chips on a choice of bread; fries or onion rings may be substituted for a price.

Abe Martin, the peculiar character who gives the Lodge, its menu sections, and many outlying cabins their name, was the creation of Hoosier humorist Kin Hubbard, who imagined a world of rural isolation and home-spun philosophy in the then-remote wilds of Indiana’s most beautiful county nearly 100 years ago. From 1905–1930, “Abe Martin” was the mouthpiece for Hubbard’s daily quips, accompanied by sketches of Abe and his friends in action, in The Indianapolis News. The Abe Martin series was also syndicated across the nation.

The dinner menu at the Lodge features one of the scratchy renderings of Abe Martin and this quote: “Nobuddy ever listened t’ reason on an empty stomach”

He could be right about that…

There are also “Pearl’s Sandwiches for Kids” including hamburgers, hot dogs or grilled cheese.

Full of fried chicken and suffused with an honest affection for mankind and all of his devices, I gazed out the window into the thousands of acres of unmolested natural beauty that is Brown County….

And I was a profoundly satisfied man.