The bluegrass world may have lost its Father and its King, but the music lives on in the heart of Indiana. The upcoming Bill Monroe Memorial Bluegrass Festival in Bean Blossom is an annual tribute to the Father of Bluegrass, Bill Monroe, but this year it will also memorialize Jimmy Martin, the King of Bluegrass. Martin, one of the festival’s scheduled headliners, passed away on May 14 after a battle with cancer. 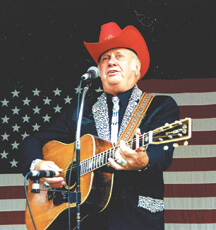 The “King of Bluegrass” Jimmy Martin

Martin was lead vocalist for Bill Monroe’s Bluegrass Boys in the early ’50s and played with the Osborne Brothers before forming his own group, the Sunny Mountain Boys, in the mid-’50s.

A number of now-famous bluegrass artists were Sunny Mountain Boys at one time or another, including J.D. Crowe, Paul Williams and Bill Emerson. Martin notched a half-dozen country chart hits from 1958–73, the last of which was a collaboration with the Nitty Gritty Dirt Band on “Grand Ole Opry Song.”

Ralph Stanley, Hairl Hensley, J.D. Crowe and others will pay tribute to Martin with a special show on the final night of the festival. The Jimmy Martin Tribute Show on June 18 will honor one of the most revered veterans of early bluegrass and one of the festival’s most popular performers. For many fans, Martin’s high lonesome tenor voice embodied the spirit of bluegrass, and he will be sadly missed.

The festival itself is a celebration of the music to which Martin and Monroe dedicated their lives. Spanning eight days, from June 11 through the 18, the festival is packed with music and activities for the entire family. What better way to savor the last days of spring in Southern Indiana than enjoying traditional old-time music in a rural setting? The scenic Bill Monroe Memorial Music Park provides an ideal backdrop for outdoors music-making.

The roster of the 39th Annual Bill Monroe Memorial Bean Blossom Bluegrass Festival is filled with many of the most famous names in bluegrass music. A glance at the list of scheduled performers shows that the festival is, true to its billing, “bigger and better than ever.”

Aside from the previously mentioned artists, The Dillards, Bobby Osborne of the Osborne Brothers, James Monroe, Paul Williams, Larry Sparks, Raymond Fairchild and many others will perform. In total, over 45 acts will appear.

A particularly notable addition to this year’s program is country star Patty Loveless, who will perform on June 16. Loveless enjoyed mainstream success in the ’80s and ’90s with chart-topping country hits such as “Chains” and “Blame It On Your Heart” before returning to her bluegrass roots. Her most recent albums, Mountain Soul and On Your Way Home, have garnered critical acclaim and the admiration of traditional music lovers.

As if eight days of wall-to-wall bluegrass music isn’t enough, the festival also features a host of other attractions and events. Daily instrument and music workshops, a flea market, a free sausage and bean supper, contests, giveaways, and children’s activities are a few such features. A Sunday worship service followed by a program of gospel music rounds out the festival’s varied offerings.

As always, the park will provide shuttle bus service, free admission to Bill Monroe’s Museum, food concessions, a fitness trail and a fully stocked lake for fishing. The performances will proceed regardless of the weather, so visitors are encouraged to bring umbrellas and lawn chairs for the outdoor amphitheater. Alcohol and pets are not allowed.

Tickets and information are available by calling 812-988-6422 or visiting <www.beanblossom.com>. Accommodations for camping and lodging are also available. The Bill Monroe Music Park is located five miles north of Nashville, Indiana on State Road 135.