Behind the Green Valley Lodge, west of Nashville, there’s a garage-like building with non-descript siding that houses the Nashville Dance Studio.

The founder, organizer and head dance instructor, Janet Spears, admits that running a dance studio was not her primary life-long goal. “I’ve danced all my life,” she said. “But I hadn’t done it for quite awhile when I inadvertently met Carl Walker and Harlan Rice at a pottery show when we moved here (1996). They were talking about tap dancing and I said, ‘Oh, I used to do that!’ So they called and I danced with them for awhile. And before I knew it they said, ‘You know, we’re kind of ready to retire. What do you think about taking over?’ So it was really an accident, how this whole thing happened.” 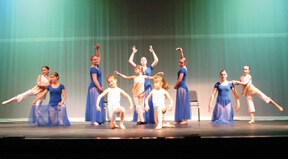 Janet began teaching dance classes in 1998, originally at the Onya La Tour Center. When the city of Nashville purchased the Center building, Lana Wrightsman came to the rescue. She and her husband erected the building behind their motel, fitting it with a large temperature-controlled space. The smooth laminate floors, mirrored walls and sturdy bars lining two walls make a credible practice area.

Most of the dance studio accoutrements were donated long before there was a use for them. “People knew I danced and was teaching,” said Janet. “Some people from Bloomington called saying they had all these bars and mirrors and wanted to know if I was interested.” Much to Janet’s husband Larry’s dismay, the Spears Gallery became the repository. Initially lined with egg cartons, the walls of the dance studio have since been draped with lengths of white fabric. “The fabric covering is really a sound barrier because when I get a class of tap shoes in here, it gets really loud!”

Janet Spears teaches twelve classes each week, including everything from ballet, jazz, tap and lyrical to hip-hop, a new style of dancing recently added. Although the classes have been exclusively for children this year, she also teaches adults. “The past few years I’ve involved dance majors from Indiana University,” she revealed. “This year I have two teachers, Angie Sansone and Rae Kilfoil. It’s been good that I’ve been able to utilize college students. The kids are getting a little preview of what a college level class is based on. And the student teachers are also getting some real world experience.”

One of her classes is for four and five-year-olds. “It’s a long 45 minutes for me,” she laughed. “You have to have every minute planned. But it’s a treat. They listen well since they’re all in here because they want to be.”

Prior to their return to Indiana, the Spears lived in Gatlinburg, Tennessee, for fourteen years. “We were both from Columbus, Indiana, so this was like coming home. When we left to go to Tennessee we both had full-time jobs and little bitty kids, and told our parents, ‘We’re quitting our jobs and moving to the mountains and we’re going to be potters.’ Janet laughed, “My Mom wasn’t real happy.”

With the students at the Nashville Dance Studio, Janet Spears produces an annual spring performance, a dance show at the 4-H Fair, and is considering developing a “jazzed up version” of the Nutcracker Suite in December. For the productions, Janet choreographs the dances, chooses all the music, oversees the lighting and stage management and plans the costumes with the parents. She discounts the hours of preparation. “It doesn’t seem like work at all,” she smiles. “It makes it all worth while when I see the excitement on their faces when they come off stage.”

This year’s spring performance, Soundtracks and Suites, which took place at the Nashville High School Auditorium on May 21 featured twenty-nine different dances and forty-two performers. Attended by well over 200 people, the dances ranged from four-year-old sugar-plum fairies in tutus and wings to the “Men in Black” hip-hop. “It’s a commitment on the part of the parents as well,” she added. “I have several parents who, during the intermission, sell cookies and coffee. Those funds we use to enter competitions.”

Every other year, students compete in different categories and age groups at Indianapolis dance contests. “I kind of edge away from the competition side of things,” Janet commented. “But it gives the kids good performing experience, since they are learning performing arts. I don’t want them to develop a competitive edge to their dancing because I’m from the old school. To me, it’s an individualized art form.” Judging from the trophies lined up on the studio shelf, the students do well without making juried competitions a top priority.

“Dancing helps the kids feel better about themselves,” she added. “One thing I really try to diffuse is the notion that everyone has to be the ‘right’ body size. They torture themselves about wanting to be this perfect size that they see in magazines—images that were probably altered in PhotoShop. There’s no perfect size for a dancer. Whatever size you are is the perfect size. But they get some exercise in here, that’s for sure!”

Those interested in taking classes and/or learning more about the Nashville Dance Studio can reach Janet Spears at
812-988-1287.