Skip to content
Sampler at the Pine Room Tavern 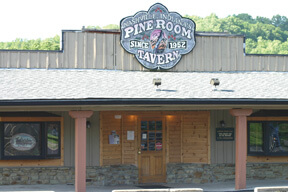 “Is there a perfect meal?”

This is the deep question faced both by death row inmates nearing the end of their stay, and those unfortunate professional diners whose palates have become jaded and besotted with the fussy entrées of pretentious chefs.

There comes a time when one seeks nourishment beyond mere decoration, beyond titillation and unbridled fashion. And down near the core of our beings is a deep-seated need and desire for a simple, solid meal; for the indigenous food of our native lands.

I am an American and when I come to this turn of taste, I find myself eager for that quintessential American repast—the hamburger.

Accordingly, I embarked upon what can only be described as a local institution in Nashville, The Pine Room Tavern, located in Salt Creek Plaza off state Road 46.

The Pine Room is something of a local legend, more so in its earlier, downtown incarnation, but whether by force of habit or merely as an expression of resident sentiment, it has continued since 1950 to be the destination of Brown Countians seeking the refuge and comfort of a local country pub.

My interest was not entirely romantic or anthropological; I had recently noticed that the establishment had added this claim to its advertisements and bill of fare: “Best Cheeseburger in the State!”

Naturally, as a professional diner, my interest was piqued.

The new Pine Room is dominated by a horseshoe bar instantly recognizable as the typical “local watering hole.”

On one side of the bar is an open area with billiard tables, for those who may become seized with the desire to demonstrate the principles of geometry and physics. It also becomes the bandstand on weekends when the tavern features live local music.

On the other side, a row of booths offers semi-seclusion from the traditional give and take of opinion and discussion.

I settled in and quickly ordered the Pine Room Burger, the “Best Burger in the State” and waited with keen anticipation.

Professional dining is, of course, not only about the eating….There are certain deep mysteries, philosophical explorations and contextual inquiries.

Beyond the menu lies the true self; the inner conscience; but only through serious introspection, preferably over appetizers, can we reach true understanding.

I suppose there have always been hamburgers, since, without them, surely the race would have long since perished.

As early as 1889 in America, one could find on restaurant menus a “Hamburg steak” which consisted of cut-up beef eaten cold, and was apparently so named by association with German immigrants from the namesake city, a common port of departure.

By 1901, historical evidence reveals, the beef had become ground and fried or grilled into a patty, and its name refined to Hamburger. At the 1904 Saint Louis Worlds Fair, the burger hit the bun, actually a hard roll, and the modern day hamburger was officially born.

Mass distribution of the fast-food hamburger began in 1921 with White Castle. The tiny burgers were an immediate success at five cents each.

My appetizer arrived: a nice plate of freshly made onion rings, complete with a dipping sauce and, purely as a control, mind you, I sampled the French Fries which were hot and tasty.

There are other sandwiches and appetizers available on the Pine Room menu, of course; but when one has entered the realms of the “Best Cheeseburger in the State,” to sample anything else would be, well…un-American.

The masterpiece arrives: a large, hot hunk of grilled ground Angus beef, draped with melted cheese on a fresh, soft bakery bun. On the side are thin sliced red onions, a tasty slice of tomato and a handful of good kosher pickle slices.

I paused with a decent respect before attacking the burger: I appreciated it in all it’s glory; savored the tradition, drank in the wafting odors of a “meal on a bun.”

It seems an intimation of perfection.

The condiments have arrived in squeeze bottles nestled into the cardboard six-pack which once held bottles of Pabst Blue Ribbon; The Pine Room’s concession to fashion and frivolity.

I add mayonnaise to complement the lettuce; mustard to augment the onions and just a touch of ketchup to assist the tomatoes and, in the immortal words of Bledsoe, “…to make it look like a fresh kill….”

I gaze out at the farm field next door where, appropriately, cows munch contentedly in the grass, blissfully unaware of their ultimate fate.

I ponder tradition and culture; I consider class and social context; but mostly, I just enjoy what poet/pilot/pirate Jimmy Buffet immortalized as “…that American concoction on which I feed.”

And, as we all know, that concoction is a “Cheeseburger In Paradise.”

And I am a profoundly satisfied man.