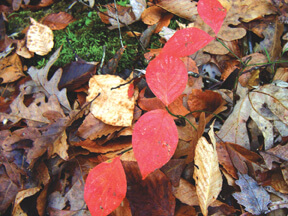 Steve Conrad and his photographic journey.

A Walk in the Woods

In 1982 Steve Conard had been living in Chicago for six years with his wife Patricia and young daughter Jocelyn. Because of Steve’s interest and talent in design and other art forms, they had spent most of their married life living in cities. He had sculpture studios in both Chicago and Boston where he worked on dance environments and light sculptures.

Their thinking about city living began to change as their daughter became school age. They decided a rural environment would give their daughter a broader education, one that was more directly connected with the land. Where would they go if they did make a move? The rolling wooded hill country of southern Indiana became a part of their search.

Bloomington, Brown County, and Columbus seemed to be an area that fit their requirements as a rural region with a history of actively supporting the arts. In 1982 they bought some wooded acreage near the Brown County–Bartholomew County line.

Steve quotes Henry Throreau as a guideline for their move: “Go confidently in the direction of your dreams! Live the life you’ve imagined. As you simplify your life, the laws of the universe will be simpler.”

Steve has come better acquainted with his plot of land than most of us with the land we own. He thought he knew his property pretty well having lived on it for 24 years. But last year in the spirit of Thoreau, he made a commitment to hike the same one-mile trail in his woods every day for a year. He would take photographs, record sounds, and make notes on his daily excursions through the changing seasons.

Steve acknowledged he did not make the full 365 days, but he came close. He took over a thousand photos, a fraction of them were exhibited at Art Columbus Gallery through February.

Many of his photos are close-up views of flowers, plants, leaves in all seasons, wood, fungus, mushrooms, stones, and water of which we would be totally unaware unless we were on our hands and knees with him as he recorded the hidden beauty.

With the warm days of spring nearing when many like to hike in the woods, I suggest that on your hike you get down to the eyelevel of a four year old and view your world in a new light. When we grow tall we miss much of the beauty that lies near our feet.

I found Steve’s exhibit startling and a bit overwhelming. To see the beauty of the four seasons compressed on the four walls surrounding me was like receiving a shot of concentrated energy.

Steve writes: “This creation that we see around us is sustained by a pulsating relentless, vibrating energy through time and eternity. Within these woods, and the universe, this can be described as a creative energy, which is perceived to include and also supersede everything. Each event, each step on my walk, often manifest in relationships, how we reflected upon these relationships, being then a reflection upon ourselves.”

The notes Steve took on his walks he often condensed into poetry. An autumn walk ends with his poem Leaves:

A single leaf flutters twisting and turning
trying relentlessly to defy gravity’s pull,
finally a gentle crash into a carpet of leaves.
Leaves once in the tallest tree canopies,
now beneath scampering feet of squirrels.

Many of us live in Brown County because of the beauty of the natural landscape that surrounds us. Let us not become too busy and casually take it for granted. Steve’s one-year photographic journey in the woods reminds us of how much of that beauty we are missing, and that we should take time to stoop and smell the fungus.