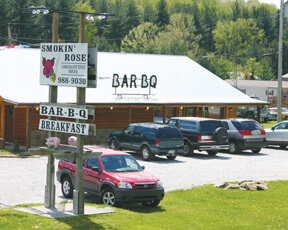 I suppose there is hardly a more American food than that delightful concoction of roasted meat and spicy sauces known collectively as “Barbecue.”

Barbecue itself is probably as old as when humankind first chopped up beasts and roasted them over an open fire, and the first “real pit barbecue” was probably located in a cave.

Fortunately for us, the species has evolved a good deal since then, to the point that when we get that primitive urge to gorge on roast beast, we can do so indoors and with a tasty variety of sauces and side dishes to add flavor and variety.

Still, for all of the advances made in our climb toward so-called civilization, when I was struck with that potent desire for barbecue, I found myself bound for a little town named, fittingly, “Gnawbone.”

There are various theories as to how the little town ended up with a name that never fails to strike visitors as humorous; too numerous to recount here, and, in any case, so unlikely that one may as well invent his own particular account.

I think that we can safely conclude that early Brown County residents were a poetical and free-thinking lot, probably given to the sarcastic, absurd, or downright satirical sense of humor still in evidence among their descendants today.

In Gnawbone, one easily finds the Smokin’ Rose, a restaurant dedicated to “Carolina Pit Style Bar BQ” at 4359 East State Road 46 (on the south side of the highway.)

Open Wednesday through Friday from 11 a.m. until 8 p.m. and weekends from 8 until 8, The Rose is home to Ribs, pulled pork, beef, chicken and is also a top-notch breakfast spot.

A variety of barbecue platters allow the casual diner to tailor his dinner to his own taste, starting with the Smokin’ Rose Sampler, featuring smoked beef, pulled smoked pork, a quarter chicken and a taste of their famous ribs.

I opted for the Pulled pork Platter, tender pork smoked for 12 hours and then pulled from the bone and piled high on the plate. The smoked beef or pulled chicken platters are also available.

For each of these choices, there are a variety of sauces right on the table, so you can experiment with different tastes and combinations. Sauce choices include Rose’s Regular, Warm ’n’ Spicy, Carolina Gold, Smokin’ Honey and “Radical Redneck Hot”, which even the siren call of professional dining can’t entice me to attempt.

My companion ordered the Half BBQ Chicken Platter, and found the tender, hickory smoked poultry quite tasty.

“BBQ is a whole culture,” she explained between mouthfuls. “There’re all kinds of different barbecue. It makes you want to try little out of the way places off the freeway.”

Smokin’ Rose has sandwiches—pulled pork and chicken, smoked beef and ham, pork tenderloin and even a hickory-smoked BLT. Each is served with one side, chips and a pickle and all are under six bucks.

I had a side salad, but the Rose also offers a dinner salad, a “Smokemaster’s Salad” with cheese, smoked pork and chicken on mixed greens and veggies and a smoked chicken Caesar salad.

The Rose also serves ham and beans cooked with loads of smoked ham and pork drippings along with a thick slice of center-cut smoked ham, southern fried tators and sweet corn muffins.

The Smokin’ Rose also offers all of its meats and side dishes by the pound and quart and also offers event catering.

I savored my pulled pork and sweet corn bread with cole slaw and a tall glass of iced tea, wondering if I should have tried the ribs.

But I was content to stuff my face with meat carefully pulled from the bone and slathered with sweet hickory-flavored sauce.

I sipped my ice tea and reflected on the dessert options, finally deciding to pass, in keeping with my now-nearly-forgotten New Year’s resolutions.

Swollen with meat and sauce, I reflected on the inevitable passage of time; from New Years to spring, from the “discovery” of Gnaw Bone to the present day, from that first caveman barbecue in some forgotten cave some thousands of years ago to a table at the Smokin’ Rose where I sat stuffed to the gills and suffused with respect for all mankind.

And I was a profoundly satisfied man.