Gallery by the Green

New business owners are by nature optimists. Is it a sound business plan? Will the public respond? Will the business fit in with the community? There are a thousand questions and in the end the only way to answer them is to open up the shop. So it is with Joseph and Charlotte Gore who have recently opened Gallery by the Green in downtown Nashville.

While both are Indiana natives, Joseph from Camby, just north of Mooresville, and Charlotte from nearby Unionville, they’ve spent the last thirty years living throughout the United States, from Chicago to Juneau to San Francisco, Los Angeles, and Houston.

“We’ve had a lot of different lives,” Charlotte says. “I’ve been a secretary, a student, a human resources manager, and a graphic artist.”

“I was a social worker in Chicago, investigating child abuse cases for the Department of Children and Family Services, and have a Master’s degree in Labor and Industrial Relations,” Joseph adds. “At the moment I’m a California lawyer,” he laughs. “My last position was assistant general counsel for the Honeywell Corporation. I left that position and we decided to travel for awhile.” 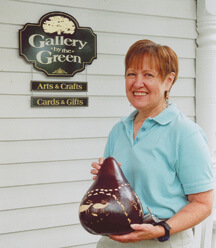 “We traveled a few years in a RV,” Charlotte adds. “We went around the United States. That’s how we got many of the pictures that Joe has taken in the Gallery.”

Moving back to Indiana to be near their families was an easy decision. So was settling in Brown County.

“We’ve always wanted to live here,” Joseph says. “Brown County is one of the most beautiful parts of Indiana with nature right up to your doorstep—even if you’re in town.”

Gallery by the Green grew from Joseph’s interest in photography. “We started off with cards. Went to a couple of arts and crafts shows and people kept saying, ‘Why don’t you have any enlargements?’ And I started doing enlargements. Obviously it’s a hobby that’s gotten completely out of control,” he laughs.

“It was a natural growth,” Charlotte adds. “I’m a gourd artist but when we were considering our business plan we didn’t want to focus just on our own work. One of the things we wanted to do was give many people an opportunity to show their work.”

“Most of our artists are local and the southern Indiana region,” Joseph continues. “We do have a couple of pieces from a little further afield. We’re trying to offer a broad range of art, craft, and country art so people can find something that appeals to them. Hopefully they’ll always see something new, something different. It’s what we’re trying to accomplish.”

“Unique would be the word,” Charlotte concludes.

The couple opened their gallery on the first of July in the 130-year-old house they rent near the corner of Jefferson and Main Streets and have been expanding ever since. “Each time people come back here they’ll see new things because we’re continuing to add artists and new materials,” Joseph says.

The art represented is as fascinating and varied as the Gore’s have promised. Rising new artists like Martina Celerin sit comfortably near the work of established artists like Scottie Cotton, Pat Foley Siddiq, Robert Muncie, and Stefano. Painting, photography, wood relief, and stained glass are all well represented by skilled, expressive artists and artisans.

Much of Joe’s photography, available as prints and greeting cards, is dedicated to the preservation of historic subjects, such as Indiana’s covered bridges, many of which have disappeared. Most striking are the pictures of the ancient petrogylphs and pictographs of the southwest.

“A pictograph is painted on the wall using dyes and natural materials. A petroglyph is carved into the rock face by scratching through desert varnish, which is a kind of patina that occurs because of the intense ultraviolet light in the desert. These are unique images from 6500 BC to 500 BC,” he says. “They could have been 4000 years old when the pyramids were built!”

The sad thing is that, like the covered bridges, they have been, and continue to be vandalized. “People have tried to steal them and have damaged them in other ways.”

He points an image. “Much of that damage is from gunfire. Part of this image in particular was used as a target by more than one person, many times. As late as the 1930s it was described by one archeologist as in ‘pristine shape.’ I’ve tried to do my best to restore the imagery to what I believe would have been close to its original, digitally removing that graffiti and damage.”

The images are beautiful and haunting. Joseph remembers one ten-year-old boy at a Madison Chautauqua who continued staring at the photographs even as his parents prepared to leave. “He said, ‘No, wait! I want to try to understand what these mean.’” Joseph relates.

“I said, ‘Even archeologists who study these things their entire lives can’t say with certainty what they mean.’ He wasn’t listening to that. This one caught his eye and he said, ‘I think I know what this one means. It means all creatures under God.’” Joseph smiles. “I thought—From the mouths of babes.”