When Gary and Patty Bartels started vacationing in Brown County in the middle 1970s, they had no idea they would eventually become well known Brown County painters. But, over time and with a lot of hard work, that is what has happened. Patty, a well- known art teacher at Brown County Junior School, has become an award winning nationally known artist and her husband Gary has also become very involved with painting. But, while Patty’s painting is considered Fine Art, Gary’s painting is considered sport. Gary owns and manages Paint Ball Valley and Valley Branch Retreat. The decision to start these businesses was partially made by their children.

“After inheriting 500 acres in 1991, my wife and I sat our two sons down and gave them the choice,” said Gary. “We could subdivide and sell the property, allowing Patricia and I to retire early. Or, with their help and commitment, we would build a retreat camp and the property would be passed on to them. We gave them two weeks to decide. They came back to us and said. “We will help you build it.”

Gary was pleased with the decision. The boys gave up their summers and weekends to help. Then, in 1998, after seven years of clearing, cutting lumber, then building a lake, campgrounds, Harvest Hall and a paintball field, the business was opened.

“Our dream has come true”, said Gary. “We have grown slowly. I started with 20 guns. In 2001 I opened Bloomington Paintball Supply where we sell and repair paintball equipment.”

Valley Branch Retreat now offers camping with water and electric hook-ups. The Harvest Hall, complete with a commercial kitchen and bar area, is rented to groups for occasions such as weddings, company team building and family reunions. Camping cabins sleep up to a total of sixty-four people and have various themes. The retreat also has thirty miles of hiking, mountain bike trails and a large fishing/swimming lake.

“The history of paintball is interesting,” explained Gary. “Foresters, who used small six shot guns to shoot balls of paint to mark trees to cut, eventually decided to play “war” with these guns. The sport started in 1984 and has been refined. Presently paint balls are made by an encapsulating company so the paintballs are actually edible, biodegradable, non-toxic and good for the soil. In the early 1990s the sport really started to grow.” 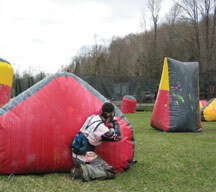 Today Paint Ball Valley, which consists of 120 rental guns and 10 playing fields, offers paintball team building for groups and individuals. This business is operated out of a semi-trailer converted into a portable facility called “the armory” where Gary also sells snacks and accessories. A state of the art repair and pro shop is located in the rear.

“One third of our business is church groups but we also schedule many company outings, birthday parties and family reunions”, said Gary. “It is a team game and it is a lot of fun. I make free dog tags on the press here for those who come out and play. The kids really love these.”

The sport also has women’s national teams and about ten percent of those visiting Paint Ball Valley are women. This sport is currently being televised on Fox Network. For insurance reasons, ages are limited to ten years and up. According to the Minnesota sport injury report, paintball is the safest sport. It is safer than bowling, archery, golf, swimming, fishing, handball, tennis, snow skiing, etc. The sport is industry regulated. Full-face masks are required and the equipment, including the rental equipment and equipment brought onto the site by visitors, is checked by Gary to regulate speed velocity to below 280 feet per second.

“Our oldest gentleman who played was seventy-two and two years ago he played at a family reunion with four generations…his grandson was ten,” said Gary. “The oldest woman to play here is sixty-six. My favorite thing about running this business is that I get to constantly be around people having fun and making memories,” said Gary. “I also enjoy being able to work with my family.”

The Bartels son Chris runs the Crossroads 5-Man Paintball Tournament Series and he is the Paintball Consultant. Their other son, Lance, gives Aerial tours and helps manage building maintenance.

“I also like being able to reside in Brown County. I especially like the creative people and the beautiful rolling wooded landscapes,” commented Gary. “In the spring I hope to offer Eco-Historic guided ATV rides to educate people about Brown County’s cultural and environmental history.”