Here in Indiana we cultivate roots music like corn and we’ve got the festivals to prove it. The waning days of summer will bring a bumper crop of musical events to Bean Blossom this year, including two biggies: the Bean Blossom Blues Fest and the Uncle Pen Days Festival.

These two annual festivals run for four days each and celebrate the joys of bluegrass and blues music, offering a family-friendly opportunity for fun and fellowship in the Great Outdoors of rural Indiana. The blues festival, affectionately know as “The Bean,” takes place from Sep. 8–11 and spotlights another form of music as quintessentially American as bluegrass.

The festival is sponsored and organized by Bushman Music Works (formerly Harp Depot), a harmonica and ukulele retailer located in New Palestine. The proprietors, John and Melissa Hall, originally conceived of the event as a private gathering for their harmonica customers before deciding to open it to the public. The festival drew 800 blues fans the first year. Attendance doubled the following year and then doubled again the year after that.

Now in its seventh year, this year’s festival may set yet another attendance record. “This will probably be our biggest ever,” John Hall says, pointing to several big-name acts on the bill. Derek Trucks, lead guitarist of the Allman Brothers and husband of Susan Tedesci, will headline on Sep. 10. Hall praises Trucks as “a great musician with a strong following.”

Hall describes the Renegades of Southern Rock, the group opening for Derek Trucks, as “an all-star collection of frontmen from southern rock bands such as Lynyrd Skynyrd, the Marshall Tucker Band, Atlanta Rhythm Section, Wet Willie and all of those kinds of groups. ‘Sweet Home Alabama,’ ‘Freebird,’ ‘Simple Man’–that’s their set list,” he says, “So this ought to be something really special.”

In addition to a full lineup of blues and blues-rock artists, the festival features beginner and advanced harmonica seminars and a harmonica contest. “I have a whole bunch of warm feelings about it,” Hall says of the Bean. “It’s turned into one of the best parties in the woods. It’s not just the great music on stage—it’s the jamming around the campfires that really makes the Bean special.”

Following hot on the heels of the Blues Fest, The Uncle Pen Days Festival takes place less than two weeks later in Bean Blossom’s wooded outdoor amphitheater. The popular bluegrass festival is now in its 31st year and pays tribute to Bill Monroe’s fiddle-playing uncle, Pendleton Vandiver, whom Monroe cited as one of his biggest musical influences. 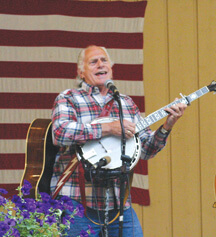 Uncle Pen Days runs from Sep. 21–24 and brings together some of the biggest names in bluegrass, including Ralph Stanley, Bobby Osborne, Rhonda Vincent, Paul Williams, James Monroe and Larry Sparks. On the last day of the festival there will be an induction ceremony for Eddie Adcock, a 2005 inductee into the Bluegrass Hall of Fame.

Bluegrass music is the focus of Uncle Pen Days, but the Bill Monroe Memorial Music Park is also a full-service campground with facilities for fishing, hiking and camping. The Bill Monroe Bluegrass Hall of Fame and Country Star Museum is on site and there will also be food and gift vendors.

Whether you’re a musician, a music lover or someone looking for a fun, outdoorsy end-of-summer activity, the Bean Blossom Blues Fest and the Uncle Pen Days Festival provide a variety of entertainments to transport you back to nature and back to America’s musical roots.

Tickets and information may be obtained by visiting Bean Blossom’s official website at <www.beanblossom.com>.