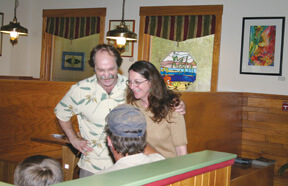 Good news from the restaurant wars! One of my favorites has been supersized.

Regular readers of this column will recall my profoundly satisfying experience some time last year at a new little Italian deli up on East Main Street.

The little deli prospered and grew and has now moved “downtown” to 101 East Washington Street, to a much larger venue, an expanded menu, but with the same family feeling.

Franco Marie’s Italian Restaurant and Deli retains its wonderful deli case stuffed with the best sandwich meats and cheeses to be found this side of the Big Apple; the home made soups continue to be the best in town, and the salads, including that irresistible Greek salad, remain on the menu.

But with the big move comes a bold move to a new full dinner menu as the setting changes from an intimate deli to a full scale Italian restaurant, complete with appropriate décor, Sinatra on the sound system and a spanking new dinner menu stuffed full of dining delights.

So it was with a great sense of expectation that I set out for Franco Marie’s, where I had arranged to meet my Attractive Colleague, an astute editor, and her charming and multi-talented son, for an early dinner.

With a tremendous strength of will developed over many years of professional dining, I resisted the wonderful butterbean soup, for which I have a distinct weakness, and the absolutely addictive calzones, a mix of select meats or vegetables combined with cheeses and spices all wrapped in a soft baked crust.

Instead, I called for appetizers; polpettos, a plate of warm and delicious potato crochettes made with chicken and perfectly browned, and an intoxicating cream cheese, artichoke and roasted garlic dip served with crusty Italian bread slices.

But even before these taste-inducers arrived, our efficient, friendly waitress left a calling card of bread, drawn butter and fruit slices to stave off any immediate pangs.

The service was good, but a word to the wise—when dining at Franco Marie’s you will want to remember to take your time. Soak up the ambiance, linger over the fare. It is a family-friendly atmosphere where you will see the owners personally greet their customers and make anyone feel right at home in their new digs.

With the appetizers in hand, our attention turned to the dinner menu proper, where choices abounded and beckoned.

Sauce choices include olive oil and garlic, meat sauce, meat balls and Franco Marie’s world-famous eight-hour marinara sauce, which I can predict with assurance will be the best marinara sauce you have ever tasted.

Also attractive was a fettucine with a delicate cream alfredo sauce and spinach or beef ravioli.

Ultimately, I opted for the lasagna, “A True Local Favorite!” while my Attractive Colleague ordered the manicotti stuffed ricotti cheese, meat and served with prosciuto.

Both were delicious served with fresh fruit, sliced bread and a side salad.

I was keely interested in the opportunity to observe an actual child order from the children’s menu. My subject passed over ham or chicken roll-ups, peanut butter and honey, and grilled cheese for the pasta and marinara sauce, which he devoured with child-like abandon. As surely he should.

All that remained was a quick turn around the dessert menu, where the traditional Tiramisu and Marie’s signature orange sorbet (served in a real, frozen and hollowed orange) have been joined by a lemon chiffon cream pie, raspberry bread pudding and, most appropriately, cannoli.

Cannoli are Italian pastry tubes, stuffed with sweetened cheese mixed with fruit or nut bits, garnished with Pistachio nuts, or as my diminutive dining companion referred to them, “mustachio nuts.” “Cannoli” is the plural, actually you are only wanting one cannolo, but it is somehow more satisfying to tell the waitress in your best Don Corleone whisper, “I’ll have the cannoli.”

A good cup of coffee arrived and I savored my pastry, the company and conversation. I thought about the old country, about the impact of immigration on national cuisine, about old friends and our own sense of place.

And I was profoundly satisfied.