Neighboring Illinois is among the many states acknowledging the skills and talents of Brown County’s early painters. Yes, some of those claimed by the Illini are native sons, but they found success and their work found popularity in Brown County, Indiana.

The Illinois Historical Art Project (IHAP) has put together histories for more than 1,500 artists who were born before January 1st 1900, lived at least half their career in Illinois or were closely attached to that state, and were primarily painters, not sculptors or printmakers.

Three artists included in the project are Adam Emory Albright, Rudolph Ingerle, and James Topping, all who painted in Brown County. 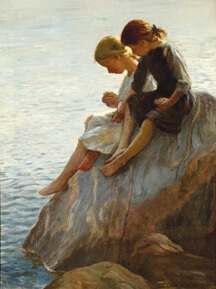 Albright was a Wisconsin native born in 1862 who studied at the Art Institute of Chicago, the Pennsylvania Academy of Fine Arts, and in Munich and Paris. In 1909 The Indianapolis Star newspaper quoted Albright’s thoughts on working in Brown County. “This is just an ideal place for artists for two principal reasons; first because it abounds in fresh material for the painter; and second because it is a mighty cheap place to live.”

Rudolph F. Ingerle (1879-1950) arrived in Chicago with his parents from Vienna, Austria, when he was 12 years old and attended Schmidt’s Art Academy and later the Art Institute in Chicago. He belonged to a number of professional organizations in that city, but joined T.C. Steele and others in forming the Indiana School of Painting in Brown County. Ingerle was attracted to hilly and mountainous areas such as found in Brown County, the Ozarks, and the Smoky Mountains of Tennessee and North Carolina. He was known as “Painter of the Smokies.” Perhaps these areas reminded him of his native country. 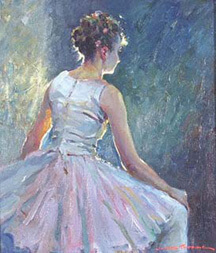 Topping was another transplant to Brown County and the U.S., coming from England where he was born in 1879. He studied there and at the Art Institute of Chicago and was active in the Brown County Art Gallery Association from 1931 to his death in Oak Park, Illinois, in 1948.

Topping came to national notoriety when Eleanor Roosevelt, wife of sitting president Franklin D. Roosevelt, purchased two of his paintings from the Brown County Art Gallery Association’s gallery on West Main Street in Nashville. Topping’s paintings had not yet been hung, but were leaning against a wall when Mrs. Roosevelt spotted them. Topping’s paintings were of spring in the county’s countryside and titled “In the Breeze” and “The Cloud.”

Mrs. Roosevelt and her entourage spent only a couple of hours in Nashville, but was reported as saying the works were, “Just like the clouds we have been seeing all day long as we drove through this beautiful country.”

An arrangement between Mrs. Roosevelt and the gallery allowed the paintings to remain in the gallery’s exhibition as long as desired before being sent on to the White House. The First Lady also purchased an etching by Oscar B. Erickson, another Brown County artist from Chicago.

The works of artists recording their impressions of the Brown County countryside and its villages and people can be found in private and public collections across the country. While once traded for goods and services and sold for a few hundred dollars, these works in oil and watercolor, as etchings and prints sell for tens of thousands of dollars.