“Let’s talk about my grandmother,” Tracy Bock says while sitting in his office on a hot summer afternoon. “Blanche Tracy lived ’till she was 93 and she was loved by everybody that knew her—maybe everybody feels that way about their grandmother,” he adds.

Tracy Bock Realty has been a fixture in Brown County for the last 26 years. Before that Tracy worked a number of jobs throughout the Midwest finally landing at Cummins in Columbus, first as a plant foreman and then as chief of security. “I enjoyed that job. I was good at it,” he says. “Then they moved me and I was coordinating shipments out to Mexico. It was boring.”

So he decided to work for himself in his hometown of Nashville. This gave him the opportunity to pursue his interest in local culture, founding the Academy of Brown County Characters, an effort to remember and memorialize some of our more outrageous citizens. “Unfortunately, all anybody wanted to do was sit and tell stories,” he says wryly. Bock also writes the homey, and at times biting, commentary of “Barnyard Butch” for the Brown County Democrat. 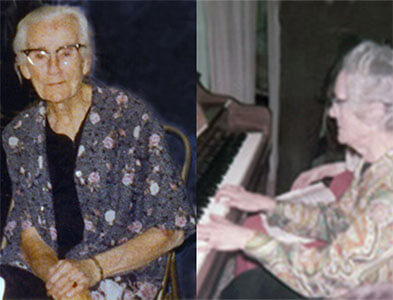 This brings us back to his grandmother. For twenty years Blanche Tracy worked at a Nashville store. “One day this gal kinda sauntered in, just picking around looking. She had ridden the bus down from Indianapolis. Some relatives were supposed to pick her up but didn’t show. So she hung around and hung around. Finally, grandmother said, ‘Why don’t you go down to my house? Relax a little bit and if people show up, I’ll tell them where you’re at.’ Nobody ever came.

“My grandmother went home that evening, probably with a sack of groceries. She told the woman, ‘There’s a spare room. You just spend the night and get on the bus in the morning.’ “As my grandmother told me that story,” Bock laughs, “she’d said, ‘You know, I don’t think I ever knew that girl’s name!’

“This exemplifies what kind of person my grandmother was.”

In 1932 Bock’s grandfather was elected county treasurer. “He rode a sorrel mare while campaigning. He’d always wind up where he knew he’d get invited to spend the night. The next morning he’d saddle up his horse and go on down the trail. That’s the way he got elected. When it came time to take office he never served a day, as far as I know,” Bock relates. “My grandmother went and did it while he continued to log and trade cattle.”

In those days everything was done by hand. “There wasn’t an adding machine, a typewriter, or anything in that office. It was all done with pencil and great big long columns of figures that they’d have to add up to balance. When taxpaying time came she’d get to looking at who hadn’t paid and if the amount was something she could afford, she’d go ahead and pay it herself.” She saved many taxpayers a ten-percent penalty.

So it was no surprise when, “Four years later the Democrat Party came to her and said, ‘Why don’t you run?’” She became Brown County’s first woman elected to office.

“I remember her talking about the Great Depression,” Bock relates. “She said, ‘We never knew when it started and when it ended. We never had any money and raised what we ate.’ Yet, she could find a silver half-dollar in her purse during the street fair for her grandson who wanted to take a ride.”

Tracy grew up in a converted garage in the back of his grandparents’ property near Blood Alley. “With some volunteer labor and with whatever money they could rake together they turned that garage into a little two-bedroom house that we more-or-less started growing up in.

“My grandmother was a good Christian all of her life and quite a singer. She sang at the Methodist church choir and with the Home Economics choir. She and Betty Mathis would sing at every one-room churchhouse in this county. I asked her one time, ‘Did they pay you for that?’ And she said, ‘Once in a while the widower or widow would give you a dollar.’ She had an old upright piano and said, ‘Before I die, I’m going to have a new spinet piano sitting right there.’”

Since Tracy knew that she could never afford to buy a new piano he devised a plan for his family to share the cost. “We hauled her old piano away and set that one in place while she was gone,” he remembers. “Putting that package together was one of my prouder moments.

“The last time I saw her play I was on her front step while she was standing in there playing. We’d tried to get her to play but she was, ‘Aw, I can’t play anymore.’ But I caught her,” he smiles. “I watched for a little bit but when I went in she stopped.”

“I can’t imagine having as much fun as I had growing up anywhere else,” he adds.” I lived away from here for ten years and all I wanted to do was get home.”