Skip to content
Little Nashville Express at the Little Opry

There are certain unique things about the way country music functions. Patterns of mutual loyalty between performers and fans, the relationship between the restless human spirit and a strong moral sense, and the respect for heritage all operate differently in this genre than, say, rock or pop. Just how these things play out is on display every Friday night at the Little Nashville Opry.

The Opry is perhaps best known to the general public for its Saturday night series, at which country’s biggest stars appear weekly throughout the warm-weather months. Those truly in the know, however, will tell you that the special magic happens on Friday.

Friday is when the house band, The Little Nashville Express, backs regional talent, beloved in this area but largely unrecorded. All the performers, the singers and the instrumentalists, are onstage because they love this particular setting. It’s not a stepping stone to bigger career opportunities for them.

This is not to say that some alumni of The Little Nashville Express haven’t gone on to success on a larger scale. One fiddle player became part of George Jones’s road band for three years. Another, Glenn Duncan, is a first-call session musician in Nashville, Tennessee, and can be heard on albums by Kenny Chesney, Faith Hill, and even artists in other genres, such as Mark Knopfler and The Chieftans.

The Friday night series began at the same time as the Saturday shows, when the Opry’s doors opened in April 1975. Esther Hamilton has been an owner since that time. After her husband Dewayne passed on, Jim Bowyer became her business partner. Just as there has been continuity in the Opry’s management, members of The Little Nashville Express have tended to stick around for years.

Indeed, so have audience members. “Some individuals have had their seats for twenty-five years,” says Bowyer, a lanky former attorney and college professor. “The staff out at the window get to know these people and get their tickets ready for them.”

Bowyer recalls the case of a twenty-eight-year ticket holder who became ill with cancer. One of his final requests was that the cast of the Friday night show do a tribute number for him. “Ronna Bemis and Tammy Sue Hogan did a very moving song in his honor,” he says.

Glasgow, Kentucky-based Tammy Sue Hogan impressed visiting star Pam Tillis during a recent performance. According to Bowyer, “As Tammy Sue was singing, Pam said, ‘Well, you know these girls from Kentucky, it’s just in them, like milkin’ a cow.’”

Ronna Bemis has been doing the Friday night shows for fifteen years. Bowyer calls her, “One of the most adaptable performers in the industry.”

Bemis and Hogan have worked up some numbers with Friday night emcee Brad Magness, whose fame extends to Georgiana, Alabama, where his band is one of the headliners at the annual Hank Williams Festival. 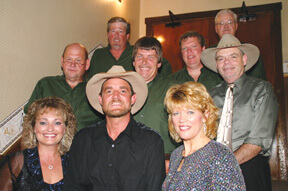 The Opry is known as the premier showcase in the Midwest for aspiring talent. Every year it hosts a talent show. This year it will be held on October 22 at 1:00 p.m. Inquiries come from all the states surrounding Indiana and several others as well. The top three placers win slots singing at the Friday night show.

Two Columbus, Indiana musicians’ memberships in the Express are typical of the longevity of service the Opry inspires. Lead guitarist Jim Allen has been with the group for twenty-six years. Pedal steel player Garry Pugh’s stint has likewise spanned decades.

Pugh’s career path is indicative of the appeal that the Little Nashville Express holds for musicians that want to stay active without enduring the rigors of the road. He is a baby-boomer (Columbus High School class of 1969) and started out as a rock guitarist. “I saw an Indianapolis band called Sounds Unlimited at a dance at Donner Center,” Pugh recalls, “and after their break, they announced that they were now called Mason Profitt and were going to do country. This was around the time of Gram Parsons and all that. It was a decisive thing for me.” He took up the pedal steel in 1973, in part because “it was easy to get work,” he says. Several years of club dates yielded an income level that waxed and waned. He took a day job with Columbus City Utilities, which he’s held for thirty-two years. He likes the degree to which music is part of his professional life now. “I play on Friday night and I have the rest of the weekend free.”

Other members of the band are Curt Edwards on drums, Tom Wince on keyboards, Andy Kirk on base, and Gordon Lowry on fiddle.

Bowyer feels that the Friday show’s success is due to the fact that “it’s a clean environment. It’s alcohol-free and family-friendly. Esther is very particular about how performers dress.”

Pugh stresses the music quality. “In that band are some of the best musicians I’ve ever played with.”

For tickets and information, call (812) 988-2235 or visit <www.thelittlenashvilleopry.com>