A brief conversation can change everything. “I was hosting karaoke,” says musician Sarah Flint. “You can have conversations with people but every three minutes you have to get up and change the song. One week I said to this guy leaving the stage, ‘You’re such a great singer, are you a musician?’ He said, ‘Oh yeah, I play in a ska (pre-Reggae) band.’ ‘Cool, I gotta go change the music.’ I didn’t talk to him the rest of the night. The next week he came in and I said, ‘So you’re in a ska band!’ He said, ‘Oh, yeah, I also play in a big band.’

“‘You do?’ I replied. ‘Do they have a singer?’ The next week he brought sheet music and told me when they were practicing. So that’s how I got into the Stardusters Jazz Orchestra.”

Stardusters Music is the rubric covering a variety of groups from a 16-piece big band to various ensembles, all dedicated to the creation of great jazz music. “I’m really thrilled to able to be singing with a big band,” she says. “That’s an opportunity a lot of singers don’t get.”

Sarah first became interested in music watching folk singers perform at the Blarney Stone, a coffeehouse inside her father’s restaurant in Michigan City. “My sister Kelly was a big influence, too,” she remembers. “She sang around the house all the time.”

Sarah learned to play guitar but didn’t feel confident performing in public until reaching college at Indiana University in Bloomington. Then she lived in Florida for a spell but never really settled in. “I felt very lonely coming back to Bloomington,” she remembers, but soon after joined WFHB Community Radio. “Doing the radio show was an opportunity for me because I craved new music and there wasn’t any anywhere else. Volunteering gave me a sense of community that I really longed for. It was a wonderful way to get involved in the community again. It made me feel like a whole person.”

Flint was able to give back by founding Youth Radio, a program that is still featured in WFHB’s Saturday afternoon lineup. “I was substitute teaching at the time and I saw so many creative and interesting kids not having an opportunity. I thought, ‘Wait a minute—they should be doing radio!’” she laughs. “It’s so easy and so fun.”

Sarah also discovered the joys of living in Brown County. “I married a Brown County boy,” she says affectionately of husband Tim Tryon. “He played guitar and sang at gatherings all over Brown County.” They formed StoneRoad, eventually touring the Mediterranean for the U.S. Armed Services. “For seven weeks we were constantly on the move. We performed in Italy, Crete, and Turkey. When Tim and I came back to Brown County I worked at the Brown County Inn for awhile and substitute taught. I was driving limousines when I started giving lessons at Roadworthy Guitar. I love teaching guitar, sharing music all day long.”

Of their home she says, “Our driveway is in Monroe County and our house is in Brown County. “I live in a T.C. Steele painting. Every single day is gorgeous.”

Four years ago Sarah formed Sarah’s Swing Set with another member of Stardusters, Robert Stright. “I thought he was a drummer,” she remembers. “Then I found out he played vibes and sang. I asked him if he’d be interested in putting something together and he was. I thought, ‘My god, he’s so talented and so good. He’s willing to work with me?’” she laughs. “We’ve had a really great time.” A Doctor of Musical Arts, Stright’s compositions have won international recognition from the Percussive Arts Society and he’s played with Ed Schuller, Joe Lovano, Victor Lewis, Ed Shaughnessy, and Seamus Blake.

Bassist Ron Kadish rounds out the band. He’s performed with the Moody Blues, Marian McPartland, and Tito Puente, as well as the Jerusalem Symphony Orchestra. “We’re really lucky to have such an amazing bass player,” she says. Their CD, Sarah’s Swing Set, features classic Hoagie Carmichael jazz standards as well as plenty of originals.

For the holiday season they’ve come up with a perfect gift called The Perfect Gift. “It’s a lovely sound, not overpowering in any way,” she says. “We started recording last January and by April we had fourteen songs. I think my favorite cut is Steve Allen’s ‘Cool Yule.’ Bob’s vocals are hysterical—they make you giggle. He shines on this album.” 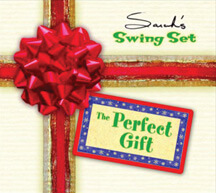 Franco Marie’s Italian Restaurant, Lotus Petal Gallery, the Visitors Center, and Chateau Thomas Winery carry the CD in Brown County. In Bloomington pick one up at T.I.S. Books on 3rd Street. You can also email <sarah@sarahsswingset.com> for a copy. It’s only $10. Look for it soon at CDBaby.com, Border’s, and Barnes & Nobles.

Sarah’s Swing Set will be appearing at the Chateau Thomas Winery in Nashville on December 17.

The Stardusters Jazz Orchestra can be found at

<www.stardustersmusic.com>. The nine-piece band appears at Bloomington’s Player’s Pub the second Wednesday every month and the big 16-piece big band performs the last Wednesday of each month.