Looking at a tango tower, even if on that particular occasion you’re not going to scale it, will produce the stomach butterflies. It’s a fifty-foot wooden structure featuring twelve routes to the top, some involving ropes, some involving climbing walls, as well as other creatively challenging means. For all the ways it beckons one to the rarified level of the treetops, it’s not the only such formidable contraption at the Adventure Center. You’ll also find a zip line, a double-decker high-ropes course, and a trees course. “This is more elaborate than most challenge courses around the country,” says Fritz Harbridge, the Action and Adventure Director for the center. That makes it suitable for the kind of training session for ropes-course managers it recently hosted.

The center is on the grounds of the Girl Scouts of Tulip Trace, Inc. camping and recreation site near Belmont. It’s a sprawling tract of land featuring cabins, tents, and a lodging facility called the Bridge House, which boasts kitchens, meeting rooms and dorm rooms in a long structure spanning a deep ravine.

A nationwide, Brown County-headquartered company called Experiential Resources built the center on the scouts’ property and hired Harbridge to market it to various kinds of groups. He’s gone right to work, spreading the word about it to corporations, sororities, church groups, and mental-health advocates, among others.

Some clients prefer to start out with the low-challenge activities, which are designed to foster group cohesion, and then move to the high-challenge areas like the tango tower and the double-decker high-ropes course, which emphasize individual empowerment and strategizing. Others are ready to start right into testing their capabilities to the maximum.

One of the ways to the top of the tango tower is the giant’s ladder, in which the distance between rungs progressively increases. Even at the bottom, it’s a space nearly the height of an adult person. It’s negotiated in pairs, and most twosomes are acting like a team by the time they reach the top. “There are a lot of ‘ah-hahs’ that go off,” says Harbridge. “I like to see that.”

Another means of ascension is the vertebrae, a series of small, cylindrical wooden blocks strung along a hanging rope. Like the climbing wall, this challenge makes the hands, feet, and brain work in close concert.

The double-decker high-ropes course offers fifteen different activities. It can accommodate fifty people at a time. A participant is connected to the overhead cable by means of what those in the challenge-course business call a lobster claw. “Your thinking can get a little different up there,” says Harbridge, pointing to the network of rope and cable in the treetops. “That’s when you learn the checks and balances of teamwork, so you think the better of it if you start thinking about unhooking yourself to go on to the next challenge.”

The tree course is more linear and team-oriented. Participants start at one end and move to the other, pausing at little platforms stationed on tree trunks along the way. Other team members can coach those on the course while standing on the deck of the Bridge House. 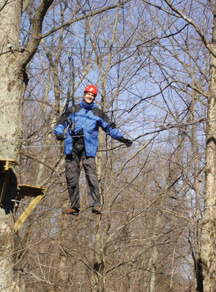 The Bridge House’s meeting areas are great places for groups to debrief and share experiences after a day on the courses. Some groups stay an entire weekend, some come for just a half-day.

“There’s a whole culture that ropes-course people are immersed in,” explains Harbridge. “Most people in this field wind up crossing paths at some point.”

He comes to his current work by way of a teaching degree from Marian College in his native Indianapolis. (He also has a degree in architectural engineering.) He worked for the Hamilton County YMCA for several years, running camps and youth-support programs. This involved a lot of collaborating with the county’s parks department. Then he taught at a magnet school for students with discipline problems. “I went to a couple of seminars on team-building to figure out how to design a physical-education program, “ he says. His interest in challenge courses is an outgrowth of that project.

Harbridge acknowledges that Brown County isn’t quite as visually compelling in winter as during the other seasons, but he says that if the weather stays mild, he will come to the center and facilitate a visit for a group. “This is actually better weather for a weekend out here than the sultry part of summer,” he says on a recent, brightly colored fall day.

The Adventure Center is ready to book your group’s visit. Contact Harbridge at (812) 988-2799 or <info@theadventurecenter.net>.