According to an old saying, “Everybody wants to go to heaven but nobody wants to die.” That rings pretty true but I know a way of practicing going to heaven without the nasty side effects. Every June since 1967 a little semblance of paradise for bluegrass fans has been created in Bean Blossom at what is now called the Bill Monroe Memorial Music Park. All you need is a love of Bluegrass and the price of admission.

The park was originally called the Brown County Jamboree Barn. The Jamboree had its start back in the late 1930s as a weekend tent show hosting local talent and occasionally big name country acts. The barn was erected in 1941. Saturday night barn dances were instituted and Sunday country music shows were broadcast over Indianapolis radio stations. One of the big name acts that came through with some regularity was Bill Monroe and his Bluegrass Boys. Bill took a shine to the place and bought an interest in it in 1951. 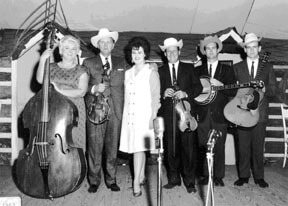 In 1959 Mr. Monroe took title to the Jamboree and continued the Saturday barn dances and Sunday music shows. In 1967, inspired by the success of the first Bluegrass festival out in Roanoke, Virginia, Bill instituted the first annual Bean Blossom Bluegrass Celebration. Back in those days things were fairly primitive—camping was pretty much in tents in a meadow, sanitary facilities were privies, and there was just one hydrant for water. But none of the fans considered any of that a real hardship. A chance to see so many Bluegrass luminaries in one place for a whole week was worth a few inconveniences.

There has seen steady progress since the first outdoor stage was built in 1968. Anybody who hadn’t been to the park since the 1960s would scarcely recognize the place. There is a beautiful museum, gift shop, Bluegrass Hall of Fame, and a re-creation of Uncle Pen’s log cabin where the old barn once stood. There are two outdoor stages. The old butt-numbing plank and stump seating is gone. Now days folks bring lawn chairs, folding lounges, or blankets for stretching out on the ground.

The camping choices have expanded, too. The park now boasts 300 RV campsites with electric hook-ups. There are 13 rustic log cabins for rent. And for those who still want that old-time Bean Blossom experience there are still 400 primitive camp sites. But with hot showers, restrooms, a laundry facility, a mini-camp store and more; things ain’t near as primitive as they once were. And for my money a camping with a hot shower is moving in the direction of heaven.

But it is the atmosphere created by the fans, the musicians, and the history of Bean Blossom that provokes comparisons to paradise. 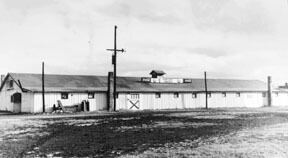 The Bean Blossom Jamboree Barn in 1948.

You might not notice anything out of the ordinary when you first drive into the park. As you start to walk down the gravel road that leads to the main stage area your step might get a little lighter. And then off to your right, just as you catch sight of an early 1950s vintage Chevy pickup truck, the “Bluegrass Express,” your ears will pick up stray notes from a banjo. A little further on and everything starts to come together with fiddle, guitar, mandolin, and bass. And then a big grin appears on your face. You might not even know you’re grinning until the first person you pass going the other way grins back. About that time you crest the little hill where you get a good look at the stage with its big sign across the top announcin’ “Back Home Again in Indiana.”

There it is, a couple of acres worth of the finest folks you’d ever want to meet. They tend to be cheerful, friendly, courteous, and kind. Plus you’ve got some of the greatest musicians in the world up on stage just pickin’ their hearts out. Over the past forty years folks like Lester Flatt, The Dillards, Jimmy Martin (the King Of Bluegrass), John Hartford, Don Reno, Kenny Baker, Josh Graves, Jim and Jesse, the Country Gentlemen, Vassar Clements—oh, heck, just about everybody who’s ever played Bluegrass, has graced Bean Blossom. This year’s line-up includes Del McCoury, J. D. Crowe, Marty Stuart, Ralph Stanley, James King, Bobby Osborne, James Monroe, Eddie Adcock, and more than thirty other Bluegrass stars. 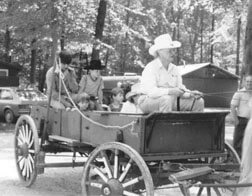 Bill Monroe giving some kids a ride in a horse-drawn wagon around the festival grounds at Bean Blossom.

Being around all that great talent is inspiring. When you come to festival I advise you to bring your favorite implement of musical destruction ‘cause your gonna meet lots of other folks there who love to practice parking lot pickin’. The number of pickers that come together at Bluegrass festivals is amazing—musicians of all ages, abilities, and geographical regions. Parking lot pickin’ is a delight to participate in or just listen to.

So there you have it—a kindly, civilized bunch of folks; great numbers of talented musicians; clean, comfortable accommodations; and no enforced agendas. It sounds like paradise to me. Heaven during the week of June 10—17 might be a little emptier because I’m perty sure Mr. Bill and Jimmy Martin are gonna be in Bean Blossom overseeing the festivities. If you wake up real early in the morning, say 3 or 4 o’clock, and kinda half wake-up to the sound of a mandolin off in the distance playin’ “Rawhide,” you’ll know who it is.