He was just a “good guy” to the other artists in Brown County’s early Art Colony. He entertained his colleagues with buckwheat cakes and sausages in the 1930s. He was often seen along a roadside or some picturesque spot painting or sketching when he wasn’t doing the same in his studio above Tilton’s store across from the county courthouse.

John William Vawter, known personally and professionally as Will, moved to Nashville permanently in 1908 (because it was “dry,” his wife is reported to have said). While he maintained the studio in town, his “home place” was 57 acres of hill and valley about a half mile south of Nashville with a spectacular view of the village. The other artists in the area referred to the place as “Rattlesnake Terrace” after a rather vague encounter with one of those reptiles. Others called it “Vawter’s Hill.” Will Vawter shared this home with his wife of two years, Mary, who was a landscape painter having studied in Baltimore and at New York’s Art Students League.

Mary Vawter was also an accomplished poet and a great fan of James Whtcomb Riley whom she came to Indiana to meet and hopefully marry. But instead she married his friend, Will Vawter. The couple divorced in 1923 after which Will moved into a small apartment in downtown Nashville where he concentrated on oil painting, using his loose, impressionist style. 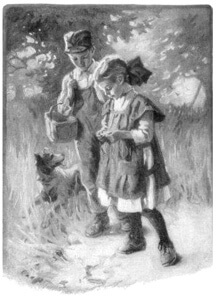 Vawter was well respected by the other artists calling Brown County either their permanent or seasonal home. In 1910, artist John Hafen, wrote to colleague Adolph Shulz that, “Will Vawter is as fat as ever, and speaks of the lovely effects when snow covered the ground and trees and again when in the night a rain and thaw turned into ice on every blade of grass and limbs of trees and bushes. He said it was the perfect fairyland.”

But it was not with the wonders of the Brown County countryside that Vawter established himself and the county in the country’s art circles. It was instead as the illustrator of James Whitcomb Riley’s books of verse. Some have said that it was Vawter’s work that put Brown County “on the map” as, besides Riley’s books, the artist had center-fold illustrations in Life, Judge and other periodicals.

Having moved with his family from West Virginia to Greenfield, Indiana, in 1877 when he was six, Vawter established a relationship with the Hoosier poet, a native of that city, that eventually resulted in Vawter’s illustrating 11 volumes of Riley poems—work done between 1920 and 1924—often using Brown County residents as models.

Late in his career, Vawter began using his automobile as a studio, a fact that the late Ival McDonald, longtime Nashville Chevrolet dealer documented by telling folks that the artist “cleaned his brushes on the ceiling” of his cars.

Samples of Vawter’s illustrations and paintings are often offered on eBay. And at <http://www.ongoing-tales.com/SERIALS/oldtime/POETRY/goblins.html> one can read Riley’s poems “Nine Little Goblins” and “Curly Locks,” both with Vawter illustrations. Another Web site featuring Riley and Vawter is <http://library.beau.org/gutenberg/1/6/2/6/16265/16265-h/16265-h.htm>.

His paintings are in collections as far away as California and often show up in auctions with an estimated value of $10,000 to $15,000.The Maine Antique Digest wrote of an Indiana auction last year that Vawter’s “Humble Home,” a Brown County rural landscape, brought $30,800.