The Restaurant Sampler
The Ordinary 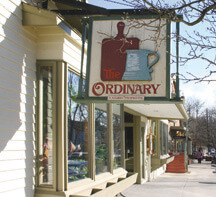 Regular readers of this column are aware that I am something of a people watcher. I’ll most often take the window seat.

There is something about being seated behind that pane of glass and enjoying your meal as you gaze out at the world at large that seems somehow to surpass even dining on the terrace, or, as the Italians say, “al fresco.”

So you will not be surprised to learn that, upon arriving at the Ordinary—the “Extraordinary Early American Eatery” located right in the middle of downtown Nashville at 61 South Van Buren Street—

I took up a position in front of the windows which overlook the sidewalk from whence I could survey the comings and goings of what Sly and the Family Stone once dubbed “Everyday People.”

I was accompanied to the Ordinary by my attractive colleague on an average weekday afternoon. The pace was languid and relaxing, and the “Bill of Board” most attractive.

There were sandwiches, of course. The usual suspects: a breaded pork tenderloin with tomato, lettuce and mayo; a boneless chicken breast, herb-seasoned and broiled to perfection; or a lean and juicy eight-ounce hamburger with select cheese added. Also, some more interesting options: a “Wild Game” sandwich featuring pheasant and turkey combined, blanketed with melted Swiss cheese; an open-faced Reuben with thin-sliced corned beef topped with Swiss, sauerkraut, and with thousand island on the side; or an open-faced “Vegetarian” with mushrooms, sliced tomato, onions and green bell peppers in a tomato sauce, smothered in melted Muenster cheese.

There are also a smoked pork loin sandwich, a deep fried cod served on bread or bun, and a pot roast and cheddar sandwich on a Kaiser roll. All sandwiches are served with steak fries.

I admit to being tempted by the pot roast sandwich, but only until my eyes strayed to the “Dinners” section of the menu, where I found an out-and-out pot roast dinner served with onions and carrots and brown gravy.

My comely comrade opted for the barbecued ribs; pork baby-back ribs basted with the Ordinary’s own smoky, tangy sauce and broiled to perfection.

Other entrees include a chicken breast marinated in Teriyaki sauce with herbs. The “Wild Game Feast,” “reminiscent of great holiday feasts of the past (turkey and pheasant) and “honest to goodness” smoked pork chops. There is a buttered and broiled fillet of grouper, an eight-piece butterflied and deep-fried shrimp dinner and a 12-ounce New York strip steak.

All dinners are served with tossed salad, steak fries, a baked potato or rice, and mini bread loaves.

Of course, it wouldn’t seem like a colonial style restaurant without a mug full of ale. The Ordinary offers a full bar with eight beers on tap. Selections include Bloomington-brewed Upland Amber Ale and Upland Wheat Ale, and a wide variety of domestic and specialty bottled beers (Killian’s, Sam Adams, Sierra Pale Ale) as well as 11 select imports including Heineken, Grolsch, Newcastle, Labatt’s and Corona. Wine and mixed drinks are also served.

For the sweet tooth, The Ordinary offers ice cream and sherbet, but is widely known for its excellent homemade cobblers and pies.

I enjoyed my pot roast—not quite as mom used to make, but as near as I’m likely to get this side of paradise—and conducted hit-and run missions into my colleague’s fare.

The décor is attractive in that early Brown County sort of way, but my attention was rather on my “window on the world” and the pageantry of everyday foot traffic up and down Nashville’s main drag.

“…Sometimes I’m right and I can be wrong

My own beliefs are in my song

The butcher, the banker, the drummer and then

Makes no difference what group I’m in

I am everyday people, yeah yeah…”

They all seemed reasonably well-fed, reasonably fit, reasonable happy. Then again, they are on vacation—most of them. The nation has prospered greatly since little ordinary houses like this one fomented talk of rebellion and revolution from the “mother country.”

Everything is not always just as we would like, but still, it is not so hard, amidst intelligent friends and good talk and basking in the warmth of a well-prepared and professionally served meal, to find one’s self a profoundly satisfied man.