Take a trip back in time at the oldest drag strip in the Midwest. Reminisce with the wife and children about that old Chevy Nova you thought was the fastest machine on the streets. Remember the Saturdays you spent washing, waxing and polishing that car until you could see your reflection in the fenders. Think about those drive-in movies with your favorite chick and the drag racing when the light turned green on the way home.

You’ll find a lot of nostalgia at the Brown County Dragway and some of the fastest cars in the state, just five short miles north of Nashville and one mile east of Bean Blossom on Gatesville Road. 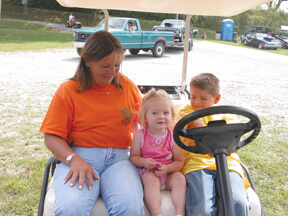 Sandy Fields, owner and operator, uses some of the best up-to-date and accurate equipment on the market to monitor the races.

“We’re considered an outlaw drag strip. We are not sanctioned with the National Hot Rod Association (NHRA) but we do use the same equipment and follow the same safety rules they do,” Sandy said. “Being an outlaw track we can give personal attention to our racers and spectators. I have an open-door policy. If you have an important question or a problem, you are welcome to come to the tower and talk to us at intermissions. We are a family here and want everyone to feel welcome. This makes us a rare and very unique breed of race track.”

The drag strip has been owned and operated by Sandy and her family for many years. Sandy took over a little more than 10-years ago and has added many different races and specials to the schedule.

With a base crew of 12 people, everyone does several jobs, including Sandy.

“The crew is part of my family now. A few have left but they came back. Racing just gets in your blood. It’s like putting an I.V. in your arm. You have to have it,” she laughed. “Karen Mason is my cousin and has been with me for over seven years. Tracy Tucker had a boyfriend who raced here in 1995. She worked here, left, and has now come back. Then there are the twins, Brent and Brad Davis. They grew up around the track. I knew them when they were little and their dad was racing. He was one of three to have perfect runs at this tract and belongs to the Dead On Club.”

Sitting in the tower with Sandy is Brittany Walker who helps run the computer, typing in drivers and car numbers, printing out the racing order, and making sure that each and every timer along the eighth of a mile track is in perfect working order. This is not your run-of-the-mill track. It’s all computerized, and fascinating to watch.

The timers along the track give you different readings, such as the reaction time from the start line, the traction you can get in 60 feet, and the mid-traction time. The last timer will give you your speed.

“I am so lucky to have such great timing equipment, it is so precise,” Sandy said. “Port-A-Tree is the best timing system you can get.”

Sandy has specials throughout the racing season.

Coming up is Mother’s Day and Sandy has a gift for all the mothers. You can race free. “We need more lady racers and maybe by letting them bring their ‘grocery-getter,’ they will become hooked on racing,” Sandy told me. “It’s not really the speed but the consistency that counts.”

Sandy hasn’t forgotten Father’s Day. “If you are a father and you get disqualified the first time around, you will be able to plead you case of why you didn’t have a good run. If I believe you, you will get another chance and it won’t cost anything.” she said.

It sounds like one big party all season long and in October that is exactly what it is. At the Fall Invitation you will find the crew dressed up in Halloween costumes, children dressed up and cruising through the pits Trick or Treating, and the music from the Night Shift Band. There will be games, prizes, and plenty of surprises.

Some Sundays include the Junior Racers (kids around age eight year old) and their little cars. Sandy is hoping to bring back the Tiny Tots Race where two and three-year-olds race their battery operated 4-wheel drives and Barbie Lamborghinis.

Sandy creates a family atmosphere for anyone who races or visits. The drivers help each other and the spectators can walk around the pit areas. Children abound through the maze of cars—a few of them being Sandy’s own grandchildren. Everyone watches out for each other. It is safe and exciting.

Bandy Russell, Sandy’s daughter, not only races but has put together a website

<www.browncountydragway.com> providing the schedule of events, weekend specials, and pictures of past races. You can learn out about upcoming trophy races and some of the best drivers to beat this season.

The Brown County Dragway is a real blast from the past, where old memories meet new ones.