People across the country think of Brown County when they hear the words “Bluegrass music” and “tenderloins.” Good things happen when these are combined on Friday nights in Gnaw Bone. A mostly local crowd gathers at the Gnaw Bone Food & Fuel in the converted-garage dining area to visit, eat, and hear some of the best Bluegrass music in the county.

The band Hickory Wind provides the music and Chef Beni Clevenger, creator of the “Gnaw Bone Tenderloin”TM made famous in 2003 when it was featured in Gourmet Magazine and on the Today Show, provides the food.

“It was a fluke,” said Beni. “They stopped in here one night about five years ago and said they’d like to play. At the time, I didn’t even like Bluegrass music. They started playing and I listened to them. They have been a huge success. They fill up the dining room…they bring in about 50 to 60 people every Friday.”

Now Beni not only likes Bluegrass music, he requests favorite songs such as “I Just Don’t Look Good Naked Anymore.” Sometimes he even sings with the band when they play another of his favorites, “Will You Miss Me When I’m Gone?”

The band’s founder, Kenny Brown, a tall middle aged environmental scientist who has played music all his life, moved to Brown County from Rushville in 1976 to manage the water utility. Brown has mastered the guitar and singing. His wife Jeanie plays upright bass and sings. The group is completed with Dennis Campbell on the banjo and Richard Allman, who plays fiddle, mandolin, and banjo. “We have no leader of the group. Either we all agree or we do not do it at all,” said Kenny. “I just enjoy making music and, if the people enjoy it, that is what counts.”

Musicians and singers often drop by and sit in with the band. One Friday Ron Shields, a real crowd pleaser of a banjo picker who plays with another local Bluegrass band named Crossfire, sat in for Dennis Campbell. Don Allen, also a Crossfire band member who is very popular with the Gnaw Bone crowd, was invited to sing.

I first heard Hickory Wind when they were playing in Nashville on the courthouse yard one beautiful summer evening about three years ago. Since that time they have performed at various venues including “Fall for Art” at the Presbyterian Church, the Brown County Art Guild, the Abe Martin Picnic, the FigTree Gallery and Coffee Shop, and private parties. 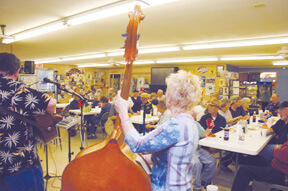 This weekly gig at Gnaw Bone is a bit more “laid back.” In the “dining room” the band plays in front of an overhead garage door and the walls are decorated with gifts for sale and IU mementos. The toe-tapping fans, ranging from toddlers to college kids and senior citizens, are seated at long tables on metal folding chairs. At any time someone may shout out to the band to joke or carry on a short conversation. Others are moved to jump up and dance.

“The band is unique in that it is a potpourri of characters that each have their own distinct way of playing—yet they blend it together. Kenny has a tremendous male singing voice,” commented Al Bierlein, a retired engineer from Columbus who comes to listen every week. “I like their music because it tells stories about people, and to me that is real American music. This is down-to-earth and realistic.”

Brown County poet Norma Jean MacLeod added, “We enjoy it so much we come every Friday night. The regulars that come here are just like one big happy family.”

Hickory Wind has been featured on WFHB radio in Bloomington and performed at the opening of a new store, Hollywood General Store, in St Joseph, Michigan. They will be playing in Nashville’s Spring Blossom Parade May 6, at the FigTree in Helmsburg on June 29 and October 26, and at Nashville’s Brown County Art Guild art walks on July 7 and October 6.

Hickory Wind performs every Friday night from 6:00 to 8:00 p.m.at Gnaw Bone Food and Fuel. For more information about Hickory Wind call Kenny Brown at (812)597-0906 or email him at