Bob Cross likes to have fun, which is one reason he sells peanut brittle. Another reason is because he had a hankering for some good candy and couldn’t find any. “In the summer months, supplies dry up,” Cross says amicably. “It’s unavailable.” Knowing that others must be facing the same dilemma Bob decided to fill the gap by distributing his own brand of peanut brittle. “I went looking for the highest quality,” he says. He chose Graber’s Kountry Kitchen, an Amish bakery, in Oden, Indiana to make his Brown County Bob Peanut Brittle.

Bob’s daughter, Margaret, is his partner in the venture. “I’m somewhat retired—not a hundred percent. She’s got all the enthusiasm.

“My brother, who lives in Georgia, was up here for a reunion. He bought one box and he called back and said, ‘Send five more.’ Last night he called and said, ‘Four more,’” Bob laughs. “He’s a little partial but he loves the peanut brittle.”

Each container of candy is sealed with a picture of Brown County Bob sitting quietly with his granddaughter Meredith in a frontier setting. “We were in Nashville—you know they have these photograph shops—I went into one with my daughter and granddaughter. They had a Davy Crockett outfit and I put that on for the picture and it turned out pretty good.

“My daughter and I have had a lot of fun with it.”

After family, it’s the memory of Elkinsville, Indiana that’s closest to his heart.

A small community 18 miles southwest of Nashville, Elkinsville was settled in 1817 by William Elkins and “Old” David Johnson, “…directly from the blockhouse which had been built in Lawrence County as a protection from the Indians during the War of 1812.” (Tails and Trails of Brown County) It was a heavily forested area, isolated from the rest of the world by the rugged hills that now comprise Brown County State Park and the Hoosier National Forest. For five generations the small farm community eked out a meager living. 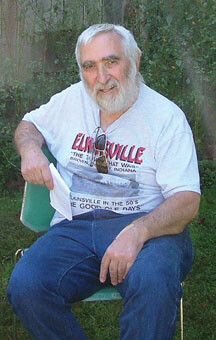 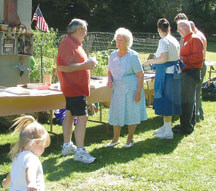 It really was a place that time forgot—quiet, unassuming, and hard to reach. That ended in 1957 when the US Army Corps of Engineers began building Lake Monroe, evacuating the little community, which sat on its flood plain. “People had difficulty dealing with the federal government,” Cross remembers. “Property in 1964 was on average sold to the government for a hundred dollars an acre. We’re talking about farm ground, tillable land. It was worth a thousand. It cost people like my dad.”

In the end, though, he suspects that moving from Elkinsville was a good thing for most residents. “It would be difficult to say that they lost by what happened,” he says.

In 1987 he and BJ Blankenfeld organized the first Elkinsville Reunion, a tradition they continue each October. “We had the reunion last Sunday,” Bob says. “There is anticipation each year of who will come. This year we had a surprise visitor—Forrest Lucas. He’s the guy whose company, Lucas Oil, funded the Colt’s new stadium. He donated 120 million,” Bob laughs. “He and I were in the same one-room school. Remarkable rags to riches story. He just came walking down the path. I thought, ‘Who is that? He looks familiar…’

“We work hard to keep the spirit of the program alive,” he continues. “It’s been a good ride. We took a town with seemingly nothing to look forward to and wrote a couple books about them—and had some fun with it.”

The books are Elkinsville, Indiana “The Town That Was”, collected and written with Nancy and Oliver Deckard; and The Dusty Road Leads to Elkinsville. Both books are full of history, remembrances, poetry, and photographs.

“That makes you feel good—to put out a product that somebody wants,” he says. “The people that have bought it have really enjoyed it. That’s all we can hope for.”

Cross has two more books in the works. “Return to Culver is a book that my daughter and I are writing together.” It’s a novel about children who must leave a place they love due to tragedy and then return twenty years later to try and pick up the pieces of their former lives. The other is Ghost Stories of Brown County, culled from stories of haints, spirits, and other spooky goings-on that Bob has collected through the years. “I’ve pretty much got the writing done but need to verify the facts and details,” he says. “It’s a work in progress.”

Of his Elkinsville home he concludes, “It was a good place to grow up and it’s still a beautiful place. When I come down the hill into the valley I can feel the energy. I soak it in and take part of it back with me.”

Brown County Bob Peanut Brittle can be found exclusively at the Story Inn, Brown County IGA, Gnaw Bone Food and Fuel, and the Gatesville Store. For information about the Elkinsville Reunion, or to reserve a copy of the reprinting of Elkinsville, Indiana “The Town That Was” write Bob at <cross1231@sbcglobal.net> or call (812) 336-1231.