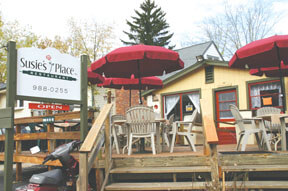 It was a glorious autumn day in Nashville as my best girl and I strolled around town, mingling with the annual mob, flowing with the human tide of visitors on the lookout for one-of-a kind treasures, great art old and new, and, of course, fine food of every description and permutation.

As a seasoned restaurant sampler, I was not necessarily seeing the town in high tide of the beautiful season in exactly the same way as everyone else on the street. My specially-developed senses were “reading” the town the way an old Mississippi riverboat pilot used to read the surface water of the “Big Muddy” to discern the shifting snags and sandbars which lay beneath.

Three things a professional diner always takes notice of: a new place; a nice, out-of the way spot; and an establishment that is obviously packing in customers.

So it was with a certain sense of professional foreknowledge and finely-tuned awareness that I turned the corner of Molly’s Lane and Honeysuckle Lane and arrived at Susie’s Place, a recently opened eatery that is, according to its own lights, “Hard to find but well worth it.”

Nothing would have pleased me more on a sunny, warm afternoon than an al-fresco seat on the wide deck littered with umbrella-ed tables—but every one was occupied, which, to the trained eye, as I have said, is a good sign.

Making our way inside, we found a cozy little table for two in the smallish indoor dining area, where a cheerful server spread the menu before our hungry eyes.

Our visit was timed for the lunch menu, and so the bulk of my attention is focused on the midday offerings, some of which are named after family members—Judy’s Taco Salad (“Believe me, this is a special recipe from a good friend, you’ll like it!”), Susie’s Chef Salad, or the signature Big John Burger.

A little reportorial curiosity on the part of my kitchen companion revealed that the monster burger—a pound-and-a-quarter of ground beef —is named for the owner’s fiancée John.

“He’s a big ol’ guy and he can eat one of those without even slowing down,” says our waitress.

There were other fine choices—a grilled chicken breast sandwich, a grilled or breaded tenderloin, and a good-looking bacon, lettuce and tomato. Also, from the appetizer menu, a basket of “onion straws” with dressing, or six mozzarella sticks, or a cup or bowl of home-made soup (our choices: vegetable beef or chicken noodle).

Now, at the risk of appearing non-serious as a food journalist, I must admit, my favorite food is the good old American hamburger. Like some modern-day Wimpy (who is a deeper and more serious character than many of us imagine) I seem doomed to wander this earth in search of the perfect burger (for which I will gladly pay you Tuesday if I can eat it today…).

So, like a moth to the flame, I could not resist ordering the humongous “Big John” hamburger. My fiancée also ventured into the arena of gigantic foods by ordering “Steve’s foot-long hot dog” with onions, cheese, and Coney sauce.

Anticipation flirted with dread as I awaited the arrival of the gargantuan hamburger sandwich. Had I overestimated my gustatory capabilities? Does anyone really NEED to eat the equivalent of five quarter-pounders at one sitting, even in the higher interests of journalism? In our current American mania of out of control restaurant portions, is it time we stopped and asked ourselves, finally, “Is bigger always better?”

Well, fortunately for the self-controlled and truly “wimpy,” Susie’s Place also offers a “Little John” hamburger, although it isn’t listed on the menu.

Our XL sandwiches arrived, and our server half teasingly, half challengingly said, “Clean your plate now.”

I began by sawing the monster in half, acknowledging to myself that at least 10 ounces of this baby was going into a carry-out. I carve off a small mountain of meat to share with my dearly intended, as she in turn offered me a portion of her foot-long.

The burger was delicious, with lettuce, onion, tomato, and mayo. The enormous bun struggled to keep that huge burger under control.

I eventually ate my fill, with a few steak fries thrown in for good measure, asked the waitress to box up the remaining portion and lounged around, finishing my iced tea.

There were desserts, of course, homemade pies “warmed to your liking” with a scoop of ice cream thrown in for 50 cents.

But we were beyond dessert; gorged like lions on the savannah, licking our fur and basking in our fullness.

I was stuffed, suffused with a feeling of meaty vitality and goodwill for all mankind.

And, most importantly, I was profoundly satisfied.