Skip to content
Bluegrass and Blues in Bean Blossom

Bluegrass and Blues
at Bean Blossom

Tilt your ear toward the wind and you might hear a sound like the lonesome whistle of a distant train. That, my friends, is the sound of bluegrass music, blowing in on the late summer breeze just in time for the 32nd Annual Bill Monroe Bluegrass Hall of Fame & Uncle Pen Days Festival, 2006.

Truly a jewel in the crown of Brown County, the Bill Monroe bluegrass festival draws visitors from around the world and has given Bean Blossom the nickname “The Mecca of Bluegrass.”

The Uncle Pen Days festival takes its name from Bill Monroe’s fiddle-playing uncle, Pendleton Vandiver, who inspired Bill to pursue a career in music. Monroe’s song “Uncle Pen” was a national hit twice, for Porter Wagoner in the ’50s and Ricky Skaggs in the ’80s, making Vandiver a household name for country music lovers.

The memory of Vandiver and Monroe lives on in sound and spirit as dozens of bluegrass artists perform over the course of the four-day festival, including such big names as Ralph Stanley, J.D. Crowe, Eddie Adcock, and Bobby Osborne of the Osborne Brothers.

Bluegrass music is steeped in tradition, a fact illustrated by the number of bluegrass families now appearing in their second generations. James Monroe, Ralph Stanley II, and Ronnie Reno have literally followed in their famous fathers’ footsteps to carry on the bluegrass tradition. 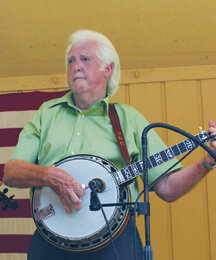 On Saturday, September 23, there will be a special tribute to J.D. Crowe, the Bill Monroe Bluegrass Hall of Fame’s newest inductee, which will include a performance by Crowe himself.

J.D. Crowe started out playing banjo for Jimmy Martin in the late ’50s before forming the New South in the ’70s, which is now regarded as one of the most important and influential progressive groups in bluegrass history. Crowe’s induction into the Hall of Fame was inevitable, and fans are certain to applaud this well-deserved honor.

The festival is a family affair with entertainment for everyone. Concessions, craft vendors, a fitness trail, a fully stocked lake for fishing, and the Bill Monroe Museum and Gift Shop are only a few of the attractions the festival offers beyond the incomparable lineup of national and regional bluegrass acts.

For those who have never attended the festival, the performances take place in a scenic, wooded outdoor amphitheater come rain or shine, so be sure to bring appropriate provisions. Lawn chairs and an umbrella, in particular, are recommended. Inclement weather can actually be fun—this writer has fond memories of watching the late Jimmy Martin perform in the rain several years ago.

The Bill Monroe Memorial Music Park is also the home of the Bean Blossom Blues Fest—known as “The Bean” for short—which takes place in early September. Running from September 7–10, the Blues Fest is a four-day shindig featuring Duwayne Burnside, Tinsley Ellis, Bobby Rush, and other practitioners of the blues. The concerts occur on September 8 and 9, but the park is open on September 7 for campfire jamming and on the 10 for a “Goodbye Bean Blossom Breakfast” in the outdoor pavilion.