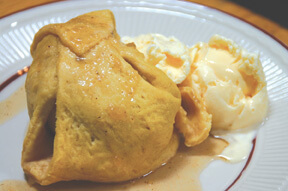 I’ve always operated by the philosophy that dinner is a journey, not a destination, and accordingly, I settled upon the strategy of a moveable feast, with each course of a traditional seven course meal to be enjoyed at a different Nashville restaurant within easy walking distance of the Liar’s Bench on the courthouse lawn.

But what are the seven courses?

Reviewing sources as varied as Emily Post, (the 1920 edition) and some snooty online chef I Googled up late last evening, I felt free to choose seven from any of the following courses: hors d’oeuvres (appetizers), soup, entrée, fish, sorbet, meat and fowl, salad, dessert (pudding), cheese, coffee, brandy and cigars, and last but not least, the “loyal toast.”

Thus armed, I set out on my journey of gustatory discovery.

For an appetizer, I wanted those “sun fries” at the Artist Colony Inn; thin sliced, French-fried sweet potatoes which come with brown sugar dipping sauce.

I made my way down to the charming 19th century style Inn and restaurant located at the corner of Van Buren and Franklin streets, where we ordered the veggie appetizer plate, which includes the sun fries, onion rings and mozzarella sticks with a very tasty marinara sauce.

The appetizers looked so good the people at the next table asked us what we were eating.

For the soup course, we strolled back up to the center of Nashville, the intersection of Main and Van Buren and found a cozy table in the back of the Hobnob Corner Restaurant.

We each enjoyed a cup of the soup of the day, in this case a dreamy cream of spinach with shredded cheddar cheese, and a house specialty, pepper steak soup, served with fresh-baked whole wheat rolls.

It was delicious, nurturing, and filling.

For a fish course we opted for the Ordinary, the Early American Eatery on south Van Buren and Old Hickory Lane, where I selected the broiled, seasoned trout fillet served with baked potato or fries, a salad, and a small fresh loaf of dark bread.

“How do people actually eat seven course meals?” asked my kitchen companion plaintively as we made our way back up Van Buren to Washington Street.

“Well, they take their time,” I explained. “Don’t worry, the short walks between each course will save us. They don’t even get to take walks at formal banquets. AND they have to wear cummerbunds.”

You may find sherbet here and there around town, but for a true sorbet, I know of only one place to go—Franco Marie’s Italian Restaurant and Deli at 101 East Washington Street in Coachlight Square.

At Franco Marie’s, they serve this frozen, hollowed-out orange filled with the tasty orange-flavored frozen gelato.

The sorbet was delicious—not merely palate cleansing, but spiritually renewing.

We waddled back up Old School Way, lumbering like overladen oxcarts, occasionally stopping to yawn or burp.

At the authentic 1912 trolley car, they serve hickory smoked pork barbecue “roasted” on site. That’s the alluring cooked-meat smell you can usually smell on a weekend day around downtown.

Their giant pulled-pork sandwich comes with a bag of chips, a couple of pickles and a choice of sauces.

Dessert called, but first there was the matter of the salad course. Curse those Europeans anyway, what with their foreign entanglements and funny ideas about where salad goes in the order of courses.

Fortunately, the most strenuous walk of all remained; a quick jaunt up the hill on the north end of town where the Hotel Nashville sits perched like a tiara.

Not only does one climb the hill, Darlene’s Bar and Restaurant are located on the second floor, high above the everyday tug and pull of Nashville life at 245 North Jefferson Street.

They offer “sensational salads,” a base of selected fresh greens with fresh vegetables, tomato wedge, fresh fruit, shredded cheese, and homemade croutons and any one of the following: grilled chicken, blackened chicken, southwest seasoned steak, grilled shrimp, or grilled salmon.

I chose the house salad—basically the same salad without the meaty additions—which was delightful with a scrumptious tomato basil vinaigrette dressing.

For the all-important dessert course, I had selected the Nashville General Store and Bakery at 118 E Washington Street, and its pastry case, a veritable wonderland of sweet treats and baked concoctions.

My kitchen companion selected the caramel apple walnut pie and the step-granddaughter went for a huge, thick, 4-by-4 square inch thick brownie slathered with caramel sauce so good she licked it off with her finger.

I had a picture-perfect apple dumpling urged on to sublimity by two scoops of vanilla ice cream.

I wanted to walk back up to the Liar’s Bench, symbolically completing my seven-course trek, but I wasn’t sure I was bodily able. But I could imagine myself sitting there, basking in the glow of completion that only a professional diner can really know.

And there I would sit, stuffed like a hunting trophy, sipping a strong cup of coffee and puffing triumphantly on a pretty good stogie.

Maybe Jeeves, my make-believe gentleman’s gentleman would appear and offer me a short brandy from a silver tray, and I would raise a glass to the object of our national loyalty.

And I would be profoundly satisfied.