Randy Cornett and Nick Brummett sift through the muddy waters of Salt Creek to hunt for gold. photo by Bill Weaver

Gold in the Hills of Brown

Did you know that Brown County is one of the best places on Earth to find gold?

The glaciers that formed Brown County swept huge mounds of rubble from Canada, leaving them north of Bean Blossom Ridge like the piles of grunge left in a parking lot after all the snow has melted. In this case the mounds are hundreds of feet high and contain bits of gemstones and minerals as well as an awful lot of rock. As time passes the gold in these hills, which has been relentlessly ground into tiny flour-sized specks by the glaciers, filters into the streams of northern Brown County.

In 1830 John Richards found gold in Bear Creek. Not long afterwards a syndicate was formed to commercially develop the claim but, as with every venture since, it became evident that while there is gold to be found in Brown County it is not in quantities to repay any investment. Attempts at commercial mining were made in 1875, 1898, 1901, and most recently in 1934, with little to show for the effort. Only the Brown County Gold Mining Association, in 1930, had the spirit of fun and adventure that motivates contemporary gold prospecting in the county.

“It’s more of a social gathering than to find gold,” says Carl Kelle, current president of the southern Indiana chapter of the Gold Prospectors Association of America (GPAA) as they gather for their monthly meeting at the Gatesville Country Store along the upper north fork of Salt Creek. “I’ve probably found a hundred dollars worth in ten years, but I do more talking than prospecting,” he laughs “I tell them at work I’m going to Brown County to go gold prospecting and come here and hide for a weekend. We have a campfire at night and talk, there’s not much else to do. I think the kids are bored the first day but the second they don’t want to go home.”

“I come down here for the camaraderie,” adds member Jerry Wilson. “I’ve been doing it pretty close to thirty years. The best thing is to get kids away from TV and video games and get them out in the country.” 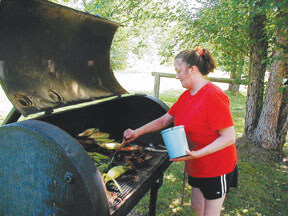 With about 56 members the group comes from Indiana, Wisconsin, Kentucky, Illinois, and Ohio. Gold prospecting has enjoyed a recent revival thanks the programs sponsored by the GPAA on the Outdoor Channel. “People have been coming here for years,” says Robin Stevens, owner of the Gatesville Country Store, while turning strips of barbecue on a huge grill. Her store serves as a home base for the group, serving food, drink, supplies, and information.

Hank Carter is the grand old man of the group. He started prospecting in 1970 and has found gold everywhere he’s gone including California, Oregon, Colorado, Georgia, Alaska, and Arizona. He wears the first nugget he ever found on a gold chain around his neck.

He’s been interested in hunting gold since seeing “old movies of prospectors sitting out on a rock with their hat brim turned up, that just done something for me as a kid. I was in Brown County and saw a newspaper clipping taped to the inside of a showcase about gold in Brown County. About two weeks later I went back. The clipping was gone but I asked the guy that run the store. He said, ‘Go back north on 135 until you come to that caboose beside the highway and turn right. Go east for a few miles and when you see somebody ask them where Gatesville is.’ That’s what got me started.

“It’s like a fever to some people,” he continues. “When I first started I got the gold fever so bad that anywhere I was if something gold colored was on the ground my eyes would lock onto it. I’m not so bad now. With me, it’s not owning the gold, it’s finding it, thinking about how old it is, where all it’s been. It’s been here for millions of years and I’m the first one to see it. That makes it interesting. The going for it and seeing it for the first time is the thrill of it for me.”

The group meets once a month at the Gatesville Country Store starting in March and continuing through October when the central Indiana chapter joins. Meetings start at 1 p.m. on the third Saturday of the month, but there are exceptions so check their website at <www.geocities.com/southernindianagpaa/> before heading out. New members are always welcome. “It’s a great place for a beginner,” Carl Kelle says. “If you’re new at prospecting someone will always offer to help.”

A prospector from Illinois holds two days worth of panning (6 grains, $12 value).

“If you ask Carl and ask me then go back to what you were doing in the first place you’ll probably be all right,” Hank adds laughing.

Out in Salt Creek Randy Cornett and Nick Brummett work their high banker in the cool water. After fifty minutes of hard work Nick skillfully pans out thirty or forty tiny specks of the precious metal. Cornett comes up from Williams, Indiana, “when I don’t have to work,” he says. “It’s a good way to spend time. You don’t find much here, but it is gold, and it’s a beautiful place. You can’t beat Brown County. Everybody treats you good here. It’s the friendliest place out of any of the places I’ve been.”